Daniel Ricciardo set the pace on the opening day of pre-season testing at Barcelona as wet weather limited running on Monday afternoon.

Having gone quickest just before the lunch break on medium tires with a 1m20.179s, Ricciardo stayed top of the timing screens as light rain turned heavier during the afternoon and made it very difficult for drivers to improve. The Australian – who caused some damage to the Red Bull during a filming day at Silverstone last week – completed 105 laps in the RB14 and ended up 0.179s clear of Valtteri Bottas in the Mercedes.

Bottas was only in the car during the morning session before handing over to teammate Lewis Hamilton, with the conditions limiting the defending drivers’ champion to seventh place and only 25 laps.

Both Mercedes drivers and Ricciardo set their best times on the medium compound tire, which took a number of laps to warm up on a cold opening day, compared to the softs used by Kimi Raikkonen in third place. Weather conditions are expected to remain cold over the next two days, with even a threat of snow on Wednesday.

Raikkonen’s time of 1m20.506s left him 0.327s adrift of Ricciardo, while Nico Hulkenberg was only 0.041s further back on medium tires as the top four teams were closely matched on the first day. Hulkenberg also completed just seven fewer laps than Raikkonen – who managed 80 – before handing over to teammate Carlos Sainz at lunchtime.

The majority of moments of note occurred during the morning session, with Fernando Alonso going off on his sixth lap due to a wheel nut issue. The Spaniard was set to go quickest having already completed a number of laps on that run, but his right-rear wheel worked loose and pitched him into a spin at the final corner, with the wheel detaching as the McLaren came to rest in the gravel. 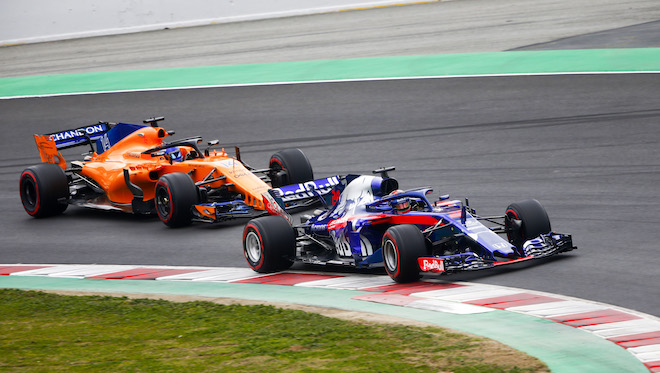 Only four further laps were possible for Alonso before lunch but he completed significantly more running in the afternoon, originally finishing fifth overall before seeing his fastest lap time deleted for cutting the final chicane. The Spaniard ultimately ended up seventh with a best lap of 1m22.354s and posting a total of 51 laps.

While McLaren struggled for mileage, Toro Rosso enjoyed a much more productive opening day. Its 93 laps completed represents the most mileage for Honda on the first day of pre-season testing since returning to F1, with Brendon Hartley reaching that total early in the afternoon but not running as the rain intensified.

Williams was the only other team to run more than one driver on Monday, with Lance Stroll in the car during the morning session before handing over to Sergey Sirotkin. The Russian propped up the timesheets due to the conditions, failing to set a representative lap time in his first session as a fully fledged F1 driver.

While the weather disrupted running for many teams, Force India’s tally of 22 laps was largely due to Nikita Mazepin spinning off at Turn 4. Mazepin caused the second of two red flags on Monday – following Alonso’s off – and the VJM11 didn’t return to the track after the incident just over two hours into the day’s action. 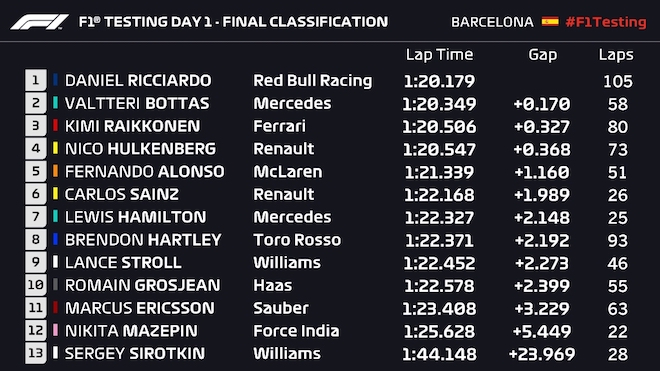