Red Bull’s Daniel Ricciardo came out on top in the first morning of Formula 1 testing t Barcelona, after a late run took him past both Mercedes’ Valtteri Bottas and Ferrari’s Kimi Raikkonen.

All three drivers logged plenty of laps, although a few less than Renault’s Nico Hulkenberg and Toro Rosso’s Brendon Hartley who were fourth and fifth, respectively, the latter showing a promising level of reliability at the start of the team’s Honda partnership.

Meanwhile, Fernando Alonso completed just 10 laps, losing time when he lost the right-rear wheel of his McLaren and was pitched into the gravel at the final corner, with a wheel nut issue later identified as the cause.

The wheels quite literally came off for Fernando Alonso earlier ?

Just a handful of laps in – not an ideal start to #F1Testing for McLaren ?#F1 pic.twitter.com/atANeIlr7L 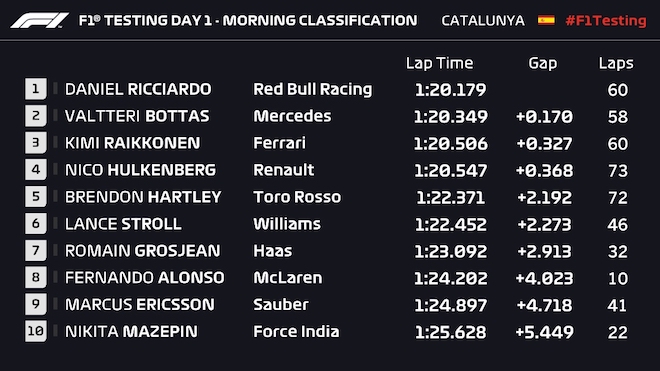