Force India has become the final team to launch its 2018 car after rolling out the VJM11 ahead of the start of the first day of pre-season testing.

While all other teams had released at least an image of their respective new cars, Force India unveiled the VJM11 in the pit lane at the Circuit de Barcelona-Catalunya on Monday morning. The car is a clear evolution of last year’s design, that carried the team to its second consecutive fourth-place finish in the constructors’ championship.

“The DNA of the car is still very much that of last year’s car,” technical director Andy Green said. “We took the decision, quite a while ago, that the launch specification of the 2018 car would be based around our understanding of the 2017 car, but with all new structures required by the regulations in place. 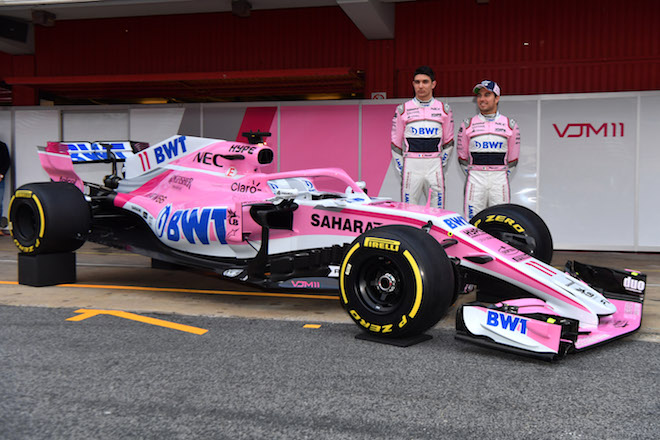 “It is a starting point, a good reference from which to introduce changes quite quickly; it gives our aerodynamics department more time to develop a car for the first race in Australia, rather than having to release parts early for testing.”

Despite big gains being expected from the likes of McLaren and Renault, team principal Vijay Mallya is confident Force India can be as competitive as it was in 2017.

“I see no reason why we cannot consolidate our position and improve,” Mallya said. “Yes, Formula 1 is a very tough and competitive environment, but we are an established team with continuity in all areas of the company. We don’t take anything for granted, but we will be disappointed if we are not fighting for points at every race this year.”

For the first time in 2018… OFF WE GO!@NMazepin takes the VJM11 and it feels like we’ve never been away! #PinkRedefined pic.twitter.com/016A37klK7

The new car was unveiled by race drivers Sergio Perez and Esteban Ocon in Barcelona, but it was Russian youngster Nikita Mazepin who gave the VJM11 its first laps when he emerged from the garage 15 minutes into the opening day of testing.

Force India was due to run Nicholas Latifi on the final day of the opening test, but the Canadian – who is the team’s new test and reserve driver – was hospitalized by what he described as “a serious infection” last week and will not take part while recovering at home.

Road to Indy 34m ago