For the first time in over four years Clint Bowyer was a top-five finisher on a mile-and-a-half track in a Monster Energy NASCAR Cup Series race.

Bowyer came home third Sunday night at Atlanta Motor Speedway, having put together a solid 500-mile race from start to finish. The No.14 qualified inside the top 10 and had an average running position of 6.16 through the day, and got to as high as second on the leaderboard.

The last time Bowyer earned a top five on a 1.5-mile track was Homestead-Miami Speedway in 2013.

“I said it all offseason, what we have to do is get more consistent,” Bowyer said. “Over the course of my career, that’s kind of what’s kept me in the game is consistency, and last year we were spraying it all over the place. We’ve had good runs and back it up with a bad one or two bad ones and then a good race. We were all over the place.”

In the season-opening Daytona 500, Bowyer also had a strong car but fell out of contention late. Bowyer said the culprit was losing a cylinder.

At Atlanta Bowyer was part of a strong team-wide showing by SHR. Kevin Harvick won the race, Kurt Busch also led some laps, and all four cars ran within the top 10 for a majority of the race. Three of the four finished inside the top 10. 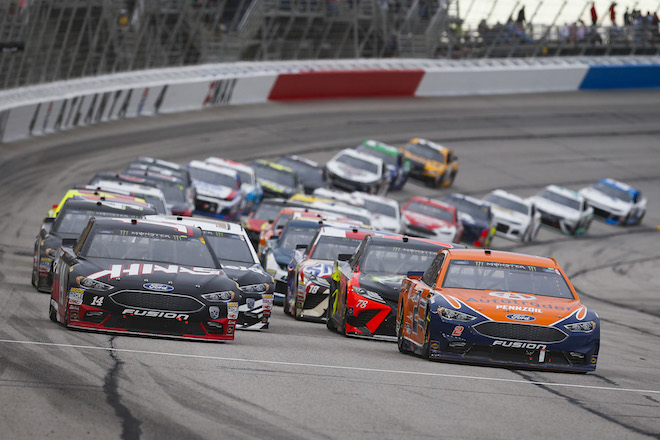 “That’s what it takes,” Bowyer continued. “You’ve got to be able to unload good cars and then work together to fine tune them to make them good for the race and enjoy the strength in numbers. And that’s certainly what we had going on this weekend.”

Last year, while Bowyer earned six top-five finishes in his first year with SHR, the No.14 team had a very sporadic season and ultimately did not have enough points to make the playoffs since Bowyer went winless. Perhaps Sunday could be considered a minor victory for Bowyer as he gets back on the board at 1.5-mile tracks. He certainly enjoyed it like one.

“What a good racetrack for me – and I don’t think you’ll find a driver that doesn’t enjoy this place, doesn’t matter where you finish,” Bowyer said. “It’s a challenging racetrack. You can over-attack it and you can under-drive it. It’s such a hard thing to find a good rhythm here and once you do, one run it feels really good and you think you’re in that same rhythm the next run and you’re probably two seconds slower over the course of runs.

“It’s just a pretty unique place. It’s a lot of fun to race at.”