Power-walking down pit road at Daytona International Speedway, the team owner was looking for Darrell Wallace Jr., who had just finished second in the Daytona 500. Signature cowboy hat in place but with the sunglasses pulled down, there was a gleam in Petty’s eyes as he was clearly overjoyed and high-fived No.43 crewmembers that walked by.

“Where’s our racer?” he asked.

Eventually, Petty turned back around and made the walk to the infield care center since Wallace had to be evaluated after a crash with Denny Hamlin past the start-finish line. Wallace was released uninjured and thus began the media interviews.

“Whoop, whoop,” Wallace said when he was introduced as the Daytona 500 runner-up in the media center.

Suddenly, Wallace’s mother, Desiree, came into the media center and made her way to the stage. The two embraced and broke down as Desiree told Wallace how proud she was and how long he’d waited for the opportunity. In response, Wallace cracked she was acting like he’d won the race.

Not a dry eye in the room pic.twitter.com/jNUNAxXOVP

Wallace’s older sister Brittany also got a hug in. And then Wallace couldn’t help but sob and be choked up as he answered what it meant to accomplish what he did. Not only was Sunday a career-best finish for Wallace in his fifth start, but Wallace became the highest-finishing African American in the Daytona 500 history, besting the mark set by NASCAR Hall of Famer Wendell Scott (13th) in 1966.

“It’s a sensitive subject but just so emotional over where my family has been the last two years that I don’t talk about, but it’s just so hard. So, having them here to support me is …” Wallace trailed off as he tried to contain himself.

“I just try so hard to be successful at everything that I do and my family pushes me each and every day, and they might not even know it. I just want to make them proud. Second [place] is horrible, but still a good day. I just love my family and having everybody here from my mom, my sister, my uncle, everybody here just means a lot.”

The finish was the cap of an already out-of-body day for Wallace. Before the race, Wallace was not only followed on Twitter by Formula 1 great Lewis Hamilton, but received an encouraging tweet. It led to a fan-girl moment, Wallace admitted. 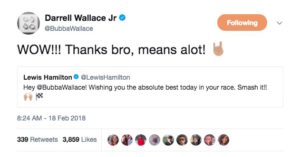 Then, before Wallace climbed into his racecar, team co-owner Andrew Murstein handed the phone to Wallace with baseball legend Hank Aaron on the other end. More good luck was sent Wallace’s way.

“There were a lot of close calls out there on the racetrack in just getting experience in my first Daytona 500,” Wallace admitted. “We wanted to do two things. We wanted to run a lot of laps and not wreck the car. We came home with one of those. We ran all the laps and got wrecked there at the end. But, that’s part of it. 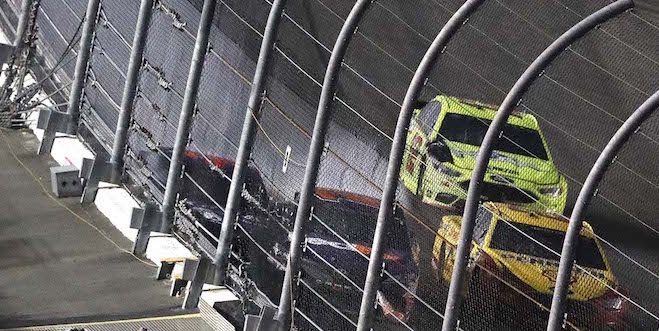 “When you put that aside, what an unforgettable week and a half it’s been. Being followed by cameras every day 24/7 for the last three months. Just dealing with that, there was a lot of stress. But I think it’s produced great content for my show, ‘Behind the Wall with Bubba Wallace.’ You can check that out on Facebook Watch. I love coming to Daytona. It’s not my favorite track, just because of the circumstances and what happens.”

Finishing second did not come by chance. Wallace had a competitive car and ran hard throughout Sunday’s event, even contending for the race lead during the first stage. When chaos broke out through the middle portion of the day, Wallace said he played it safe to save his car.

And save Wallace did in the move of the race.

Wallace was running just outside the top 10 when a multi-car crash occurred in Turn 2 with two laps to go. Sliding sideways on the apron and banking, throwing sparks, Wallace managed to avoid any contact to stay in contention for the win.

The BIG One happens with 2 laps to go!! #DAYTONA500 pic.twitter.com/GbtW7C5ZIx

Restarting sixth, Wallace made all the right moves to find himself chasing his Richard Childress Racing alliance teammate across the finish line.

“The save. Yeah, there’s a reason I skipped that. I don’t want to talk about it,” Wallace smiled. “Woooey. Daytona.”