“New” was the word of the day for Richard Petty on Friday at Daytona International Speedway.

The new-look Richard Petty Motorsports. The new Chevrolet Camaros the team is running after a switch from Ford. A new driver in Darrell Wallace Jr. New home on the campus of Richard Childress Racing. On and on it could go.

It wasn’t hard to lose track of how many times the word was used during two separate news conferences Petty was involved with. Not that you could blame him, either.

“What it was is we sort of got into a rut with the same deal, the same thing going on. So, I said, let’s just start a new chapter,” Petty told RACER about his continued positivity. “That’s when we were able to get with Chevrolet and get with Bubba Wallace to drive the car.

“Again, it’s a whole new chapter in the life of Richard Petty.”

One that’s off to a start better than many might have expected.

Thursday night, Wallace finished third in his Can-Am Duel qualifying race after impressively making his way to the front of the field late in the going. The result netted him a seventh-place starting effort for the Daytona 500, his very first start in the event. Petty described Wallace’s performance as a win for the team.

Off the track, the organization also couldn’t ask for much more.

While the attention has certainly ramped up since the series arrived in Daytona, the calendar flipping to 2018 has brought with it a consistent stream of Bubba Wallace mania: headlines, interviews, video packages and everything in between.

Even better, all the attention has all been positive. This is not the RPM of just a year ago when discussions – the little that the team usually drew – centered on performance, driver status, and even a public misunderstanding with Smithfield that played out on social media.

“It’s been good PR for us and all the people that we work with, and all our crew, too,” Petty acknowledged. 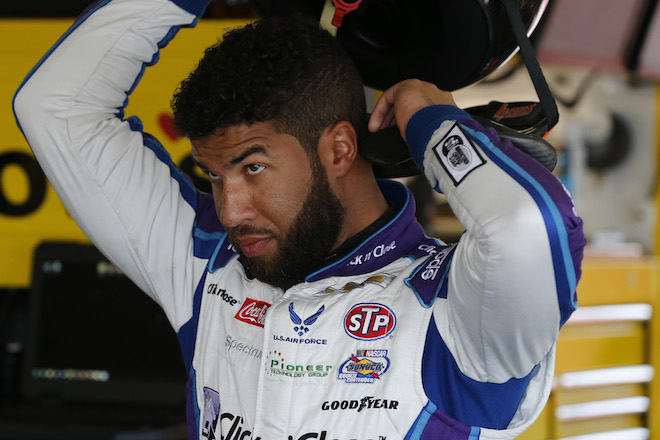 Wallace has drawn large crowds during media events where he was available. Media outlets who consistently cover the sport have seen competition from national outlets such as ESPN the Magazine, which is taking the time to highlight Wallace and the team.

Perhaps most impressive, earlier this week it was announced that Facebook Watch would be airing an eight-part docu-series featuring Wallace and his team leading into Sunday’s race (which can be found here). “Behind the Wall: Bubba Wallace” provides an all-access look at preparing for the Daytona 500 and Wallace’s first season in the Monster Energy NASCAR Cup Series.

This picture here captured the highlight of my speedweeks. This was an intense and pure moment. Seeing the look on The Kings face is something I’ll never forget. pic.twitter.com/sNsfmsfgEB