'There are a lot of new things coming at me' - Byron

'There are a lot of new things coming at me' - Byron

Adjusting to life as a Monster Energy NASCAR Cup Series driver is happening in more ways than one for William Byron.

“There are a lot of new things coming at me,” Byron admitted. “It’s been exciting seeing all the things that you get to do at the Cup level that I didn’t get to be a part of before, and what I notice the most is the fan interaction.

“Also, my lifestyle is different. I’m living at the track now. It’s so different from the hotel and traveling to the track every morning. I never had a coach before and now that’s something that is very convenient.”

Byron said the reaction from fans to his taking over Hendrick Motorsports’ legendary No.24 has been encouraging, but he’s mindful that many a close eye is being kept on his practice efforts and qualifying results. 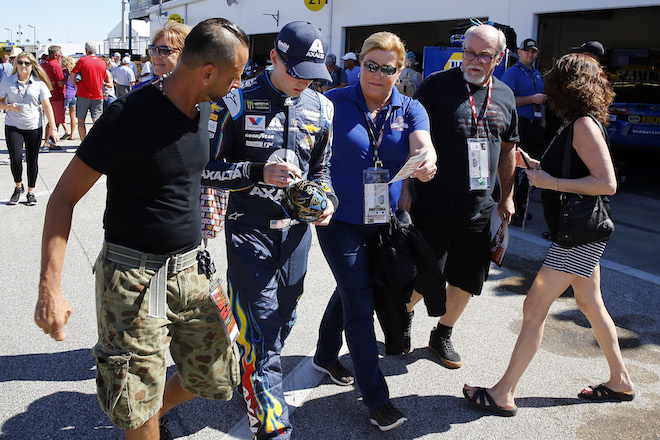 Off the track is also providing unfamiliar territory. The 20-year-old reigning Xfinity Series champion is being recognized more. For instance, Byron was eating dinner in the Daytona area this week when he was stopped by a handful of people at the restaurant.

“That’s a cool feeling and makes you realize that there are people knowing what we’re doing,” he said.

As Byron gets comfortable with the fans and being at the track more often – he said he likes seeing it lit up at night – he isn’t going it alone. Both Jimmie Johnson and a former No.24 driver, Jeff Gordon, have already explained some of the challenges and logistics Byron will face. Watching how Johnson manages his weekend from start to finish leaves plenty to digest, too. In addition, journeyman Max Papis is playing the role of personal advisor for Byron.

“I have quite a few people in my corner helping me through each situation,” he noted.

No matter the amount of preparation that might go into his rookie season, however, there will still be situations and decisions made on the fly. And Byron is ready for the times when he’s going to have to learn for himself.

“Each series is a new challenge and exponentially hard,” he said. “You really lean on all the information you have growing up in racing, whether that’s legends cars, late models, or most recently the Xfinity Series and the championship there. I think I lean on all those experiences.”