In the absence of bumping, the drama these past few Mays has been IndyCar and IMS hustling to make sure there were the traditional 33 cars. But this year is shaping up to be a full field without a lot of last-minute theatrics.

Fernando Alonso isn’t returning to the Snake Pit, but we will have the final installment of Danica Patrick’s Chevy-powered farewell tour, and that should make for a busy month of May for her fans and media alike.

According to RACER’s latest count – and this includes deals yet to be announced but confirmed to RACER by various sources – the number of driver/car combinations already stands at 33, and the chances of bumping are becoming more realistic each day.

As we wrote in January, Patrick was destined for either Ed Carpenter Racing or Dreyer and Reinbold Racing, and with the DRR opportunity taken off the table, ECR is where the IndyCar-turned-NASCAR star will ride into the sunset.

If you believe Patrick – one of the sport’s craftiest and most orchestrated characters – let Ed’s name leak by accident while speaking with the NASCAR media, well, that’s cute. After Carpenter told RACER last week his third car deal was “still getting done,” he’s acknowledged Danica will indeed complete his roster. The formal unveiling isn’t expected until after this weekend’s Daytona 500.

Her opportunity with Dennis Reinbold’s team will be replaced by an anticipated celebration of Indy Lights champions, with 2013 title winner Sage Karam being joined by 2009 champ J.R. Hildebrand, who made his first IndyCar start with DRR back in 2010 [below]. 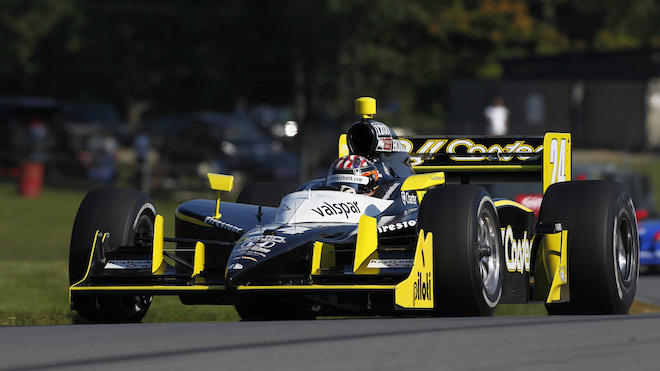 “I just bought two new cars and we are definitely running two cars this May,” said Reinbold, whose once-a-year program has been Karam’s home since 2014. “I’m waiting on approval from two sponsors before I can announce our drivers, and then we’re ready to go.

“It’s a big undertaking and plenty expensive, but our crew is intact and a big chunk of our crew for the second car is in place. And I think we’ve got a couple of talented drivers, so we’re looking forward to May.”

Conor Daly is thought to be in line for Dale Coyne’s fourth seat. Daly lost his ride with A.J. Foyt at the end of last year and has been scrambling to come up with sponsorship so he can reunite with Coyne, whom he drove for in 2016 [below]. “Nothing to report yet, but I’m working on it,” he said this week. 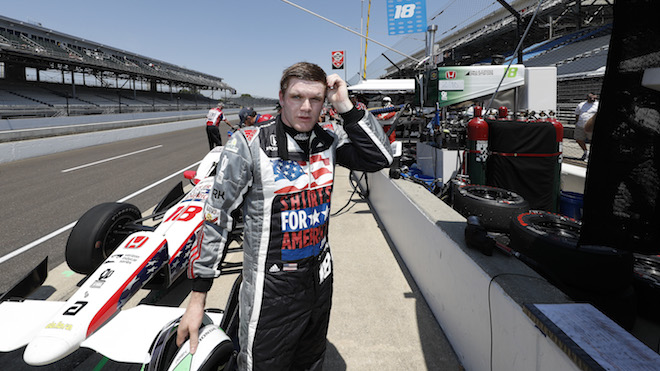 Coyne, who will field cars for Sebastien Bourdais, Pietro Fittipaldi and Pippa Mann, has previously stated he’s game for another car if the funding is right. If the program comes together for Daly, former Lazier sponsor Thom Burns could be part of a military-themed entry for the Hoosier.

Bobby Rahal, David Letterman, and Mike Lanigan are going to run a third car and it’s got Oriol Servia’s name on it. RLL is already looking mighty racy with Rahal and Sato as a twosome, and with a third entry pending for team veteran Servia, they could have a powerful month of May effort on their hands.

Before talks opened with RLL, it’s believed Servia was extremely close to signing with Schmidt Peterson Motorsports, but last-minute complications rerouted the Spaniard and his sponsor to different territory.

SPM had planned on running three cars of its own – separate from its alliance with Michael Shank – until the deal with Didier Calmels for French Champ Car veteran Tristan Gommendy fell through, which could explain Servia’s name being associated with the vacant car. Although team co-owner Sam Schmidt was unavailable on Thursday, rumors of a third SPM entry continue to make the rounds in Indy, and if a deal gets done, the program would be pushed out to four combined cars. 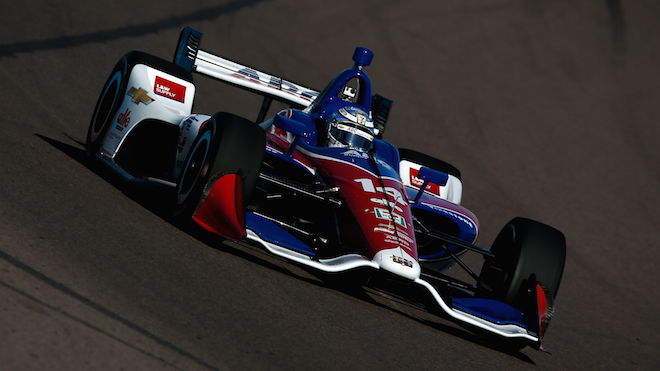 The A.J. Foyt team, coming off an impressive opening test at Phoenix with Tony Kanaan [above] and rookie Matheus Leist, has never hesitated to throw in a third car for Indianapolis. But the four-time Indy king didn’t sound optimistic about doing it in 2018.

“I definitely don’t want to run a third car,” said Super Tex. “I guess if we had to it’s possible, but I’m against it and I think I’ve got Larry (Foyt) convinced we just need to focus on the two guys we’ve got. I want to win Indianapolis.”

Ricardo Juncos made his Indy debut as a team owner last year with two cars. Running the second entry helped IndyCar to get to its field of 33, but without that concern in 2018, the Speedway-based Argentinian plans on keeping complications to a minimum with reigning Indy Lights champion Kyle Kaiser.

“I don’t want to go with two,” Juncos said. “I’d only do two if it would be something amazing for us – something big that would help the team. At the moment, I’m not talking to anybody. I think we’re going to be one car, and focus on Kyle.”

Bob and Buddy Lazier have participated in three of the last four Indy 500s and the 1996 Indy winner is planning to upgrade to the new aero package and make another appearance if the sponsorship comes in. “We’re planning to be there, have purchased some of the new parts but need to order more and update our car,” said Buddy [below]. “We’re semi-close working on raising the funds to make it, and I’d be excited to compete with the new aero kit.”

Chip Ganassi Racing managing director Mike Hull said last week that they will stick with two cars for Scott Dixon and Ed Jones, so that closes another door for Indy 500 expansion unless something remarkable happens to reverse that decision. Roger Penske’s house is full with the return on three-time winner Helio Castroneves, and Trevor Carlin’s new outfit is expected to keep things simple with Max Chilton and Charlie Kimball. 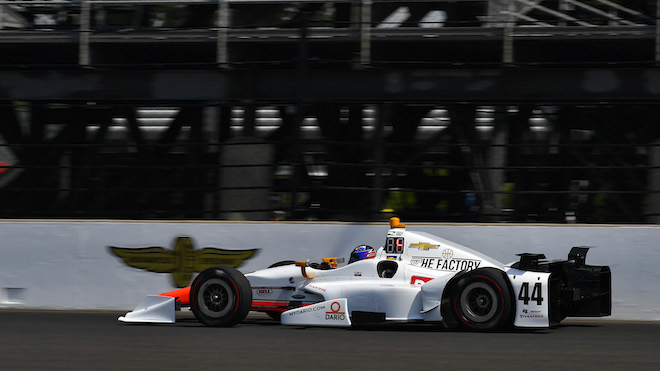 Only the new Harding Racing team is left as an entrant that has openly expressed its interest in putting a second car in the show next to Gabby Chaves, which could keep team president Brian Barnhart busy as suitors line up outside his door.

Of the other interesting prospects making the rounds, former SPM drivers Mikhail Aleshin and Katherine Legge are known to be exploring their options. Jay Howard, who drove for SPM last year at Indy, told RACER in December he expected to be on the entry list, but declined to name a team. James Davison, who stood in for Sebastien Bourdais last year at Coyne after the Frenchman’s qualifying crash, is linked up with ex-Coyne sponsor David Byrd as part of a unique package searching for an opening.

Mazda Road to Indy veteran Juan Piedrahita wants to make his first IndyCar start at the 500, former Coyne driver RC Enerson, who wowed fans during a few runs late in 2016, is another driver on the hunt for an open seat, and series veteran Sebastian Saavedra is also said to be on the lookout for a ride with ongoing support from AFS Racing owner Gary Peterson. 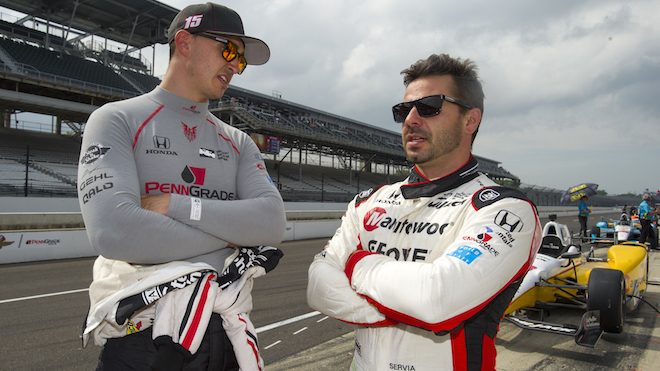 Add the four yet-to-be-formally-introduced entries for Karam, Hildebrand, Daly, and Servia [above], plus the possibility of Buddy Lazier and maybe a third SPM car to the list that’s already rather firm, and you’re looking at 33-35 starters by mid-February.