Harvick: 'I'm having the time of my life. Maybe I'm a late bloomer'

Harvick: 'I'm having the time of my life. Maybe I'm a late bloomer'

This Sunday afternoon will mark Kevin Harvick’s 17 consecutive Daytona 500 start. Far and away of NASCAR’s most accomplished and recognizable racers, the Bakersfield, California native has won the Monster Energy NASCAR Cup Championship (2014) as well as Daytona (2007). But he wants more.

QUESTION: Going back to the early days of your career when you came out of Bakersfield, California to compete in the AutoZone West Series and the NASCAR Winter Heat Series, you essentially did everything on your own. You built the cars, tuned the cars, and trailered the cars. You’re one of the last throwback drivers in the garage area.

KEVIN HARVICK: For me, that’s just the way that I’ve always done it. As you look back at all the things that you’ve done in your racing career, one of the things that I’m the most proud of is pretty much being hands-on all the way through. Being involved in your career is really important, and that’s what I try and tell these young kids. It’s like, “Nobody cares about you more than you, and if you want to get somewhere and you want to make things better, you need to be involved and understand what you’re being involved with and how it operates.”

It’s really helped me survive, honestly. There were some lean years where we weren’t winning races, but the relationships and things you had built through the years on the sponsorship side helped us through those tough times. You look around now and definitely know that you’re one of the older guys now, but I feel like I’ve never known more about what’s going on in the sport and felt more comfortable in sitting in that car and participating in the races in each week.

Q: Jeff Gordon, Carl Edwards and Tony Stewart retired before the 2017 season and Dale Earnhardt Jr and Matt Kenseth will not be racing in 2018. How do you feel about some of your contemporaries now being gone from the sport?

KH: For me, it’s different. Obviously, one of them is my boss. I came to Stewart-Haas Racing to race with Tony Stewart. I didn’t think he’d ever retire, and then he goes and retires on me in year three. That actually took me a little while to get over. I was a little more frustrated with him than I was anything else, because I wanted to be in the seat while he was in the seat. After I got over that and now I see him and see how happy he is, and I see that was the right decision at the right time for him and his life, that’s something that makes me happy. 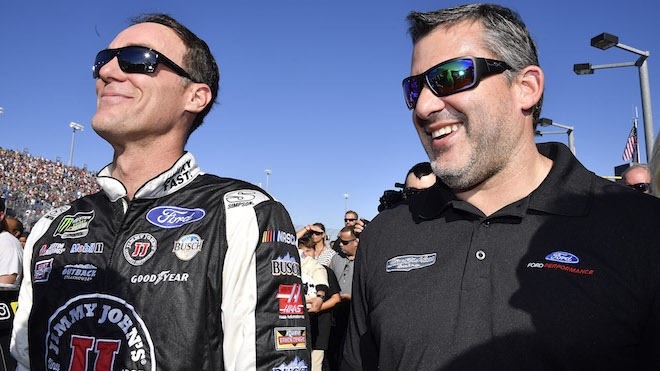 Then you look at Matt and Jeff and some of these other guys, Carl Edwards, that have retired, and I think they all have different reasons. And people ask me this all the time: “When are you going to retire?” And I’ll say, “I have no idea, because I’m having the time of my life right now, and maybe I’m a late bloomer.” I love what I do, and I love my job.

Q: Only 16 drivers have won the Cup title more than once. As far as the Kevin Harvick legacy goes, I’d assume it would be cool to be number 17?

KH: Absolutely. Whether it’s two Daytona 500s or two championships, I’ll take either one this year. That would be fine with me. That’s what we’re here for. I mean, we’re here to race for championships, and in the end, that thrill of competing and beating the guy next to you is really the drive of what makes me keep showing back up at the race track. Ultimately, you can like all the things that go with racing, but sitting in that seat and beating everybody else is still the biggest thrill.

Q: Do you like the current NASCAR playoff format or would you rather go back to the regular season?

KH: I like the playoff format. I love the things that we’ve done with the playoffs. I love the stage racing. I think that’s added a whole new element to things that we didn’t have before, and it makes the whole race more interesting. Look, I’ve raced on both sides of this and probably lost a championship in a year where the points didn’t work out, but I’ve also benefited having the playoff format on a year when we didn’t have a solid year from start to finish. In the end this is an event, and these events are watched by people, and whether they’re at the race track or at home, they want the excitement of seeing close competition and seeing a battle right to the end. I think from a playoff standpoint and from a stage standpoint, those are two of the best changes that we’ve made throughout the years, and I think that’s what keeps it fresh and exciting. 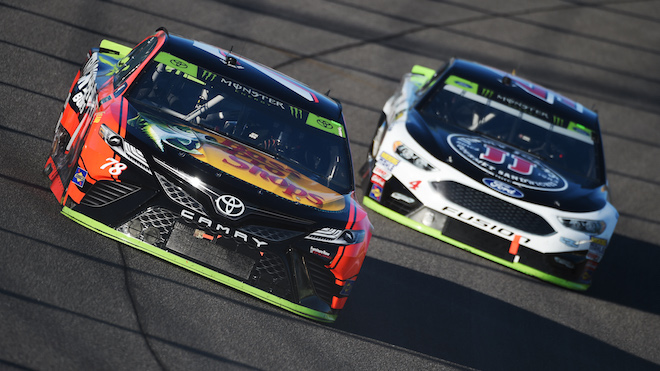 Q:What do you think of the NASCAR youth movement ?

KH: I was in that youth movement that came 20 years ago, when I was racing trucks and all of a sudden all the team owners realized that they had drivers that were getting ready to retire and that they needed to start repositioning themselves. It was different then, because everybody positioned themselves with Busch Series teams. They brought those young drivers into that particular series. It seems like the level of time that is spent in that series is a lot less than it was when I was coming up. You see that now as less and less.

Q: In the past four years you’ve won the Monster Energy NASCAR Cup Series and placed in the top three on two other occasions. How frustrating have those near-misses been?

KH: I have a pretty short memory and I think you have to, because you’re going to have a lot more failures than you are success. As you look at everything that we went through last year, just having a chance to be in that race for the championship was fantastic. The goal was to win the race and it was disappointing that we didn’t, but when you step back and look at it from a distance and realize all of the things that we were able to accomplish last year in our first year with Ford, they did a great job. We’re one for three in the championship race. I’ve been at Stewart-Haas for four years and we’ve been in that championship in three out of the last four years, so hopefully we can continue that roll.