Here, Franzoni details growing up in a family where racing was the only sport that mattered, racing against – and beating – some of the rising young stars of Formula 1 and how the 2017 season’s battle prepared him to take what he hopes to be the next eventual step: a ride in the Verizon IndyCar Series.

Tell us about growing up in Sao Paulo.

I grew up in downtown Sao Paulo and really, it was always racing. My family watched racing on TV and really enjoyed it. Everyone in Brazil watched when Ayrton Senna was racing, and kept on watching. The 1990s was when racing was at its peak in Brazil. So my dad decided to try it, just for fun. So even now, when I go home to Brazil, our favorite thing to do is to go to the track. We just can’t stop!

My dad started karting just about the time I was born, and I started when I was about 4 years old. So really, all my life I’ve been racing. We didn’t have the micro series in Brazil so I was racing against 11-year-olds when I was 4. They let me race with an engine that was lower in power than theirs when I was just starting, and I wasn’t very good so I always finished last. I was crying because I wanted to win!

What stands out to you the most about your racing career to date?

It was always me, my dad and my mom. That was our team, with my dad as my mechanic. I did all the karting series moving up, and in 2010 I moved up to Senior and won all the championships. It was very important because it earned me a scholarship from Felipe Massa to move into open-wheel racing. I was the youngest ever to win the Brazilian Karting Championship at 14.

I did a season in 2011 in the Brazilian Formula Future Championship – I finished fifth, but I could have won. I made a lot of mistakes, trying to pass people and crashing. But I found a sponsor who wanted to take me to Europe, so I did two years of Formula Renault, in 2012 and 2013. It was bad. I think I was too young, and I was staying by myself in Italy and trying to be a race car driver. I learned a lot, and it made me a better driver.

Then, I had a big accident in the rain at Spa-Francorchamps. For three days afterwards, I thought I might stop racing. But it changed me a lot. My next race weekend, it was raining and I set pole by over a second against guys like Daniil Kvyat, Pierre Gasly and Esteban Ocon. It was a reset in my mind, and after that I calmed down and made better decisions. 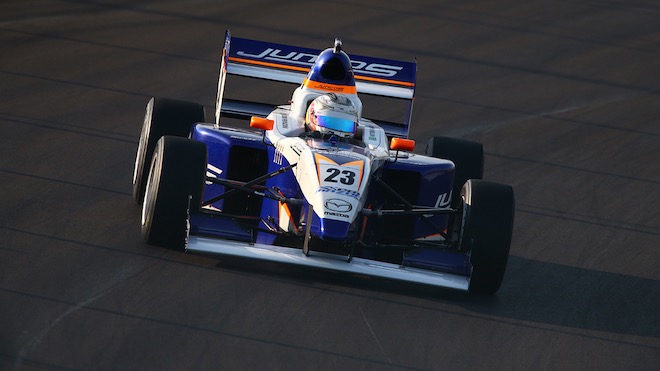 What got you interested in the Mazda Road to Indy?

I decided that Europe wasn’t working for me, and I wasn’t happy there, so in 2014 I looked around at all the opportunities that I could have and the best one was the Mazda Road to Indy. I moved to the U.S. and started again in USF2000, but I was older by then and I think this country is better at receiving people. Everyone I’ve worked with, from drivers to teams, has been great to work with. And the Mazda Road to Indy was the only place that I knew I would have a chance to move up.

I finished third in USF2000 in 2016 and then ran the Chris Griffis Test with Ricardo (Juncos) in the Pro Mazda car, but then he decided not to do the series. I was going to go back to USF2000 but the week before the season, he changed his mind and even though I didn’t have the budget, he said we would make it work. It was the best year of my life. It was the last chance for me, and it will be again this year, but it was good because it was just me and Anthony (Martin). He’s really good and it was very difficult – I had to be really smart and really fast all season long. This prepared me well for this season. I think every year from here on out will not be more difficult than that.

It’s a great feeling – I’ve never had this feeling before. Every driver has something to worry about, and I’m worrying now about not having money for testing or crash damage, but I knew as soon as the season ended last year what I would be doing this year.

What are your expectations for 2018?

Like every year – win races and win the championship! I have to win to make it work, so I will go and win, or at least be really good, so the teams in IndyCar can see me and try to help for 2019. But I am so excited about this season. To be an Indy Lights driver – there aren’t too many people who have gotten to this point so I will enjoy these moments. The goal of my life has always been to be one of the top 50 drivers in the world, like the drivers in Formula 1 and IndyCar. So to be in Indy Lights, like Formula 2, I’m in the top 100! I’m really looking forward to the season, especially the Freedom 100.

What kind of activities do you do away from the race car?

I’m still coaching kids in karting – every weekend I’m at the racetrack, doing data and coaching. But that’s my life: racing, data, coaching and the gym. I have a trainer here in Boca Raton to get me ready for the Indy Lights car.

What is your favorite racetrack?

Road America, because it’s really fast. I like the nature of the track, it really suits me. The whole feeling around Elkhart Lake is all about racing.

That’s really difficult. I have no idea what I would do besides racing! But if I wasn’t driving, I’d still be in racing, as an engineer or something. If I had to be far from racing, maybe a personal trainer so I would still be in sport.

Do you have a “hidden” talent?

Really, the only thing would be the gym. I’m really good at doing some of the bars, stuff like that. I’m good at boxing as well, which I do in the gym. It’s not really a “talent” but I’m good at it.

What do you do to relax and get away from racing?

When I’m in Brazil, I do some racing, but it’s also my vacation time. I spend time with my friends, go to the beach, BBQ and relax.