In the four practice sessions over two days at ISM Raceway in Phoenix, Takuma Sato was fastest in three of them and second best in the other.

The 2017 Indianapolis 500 winner backed up his Saturday afternoon speed with the fastest lap in Saturday night’s final three-hour session – 19.379 seconds at 189.855mph in his Rahal/Letterman/Lanigan Honda.

“To wrap up today’s test, the open test was very successful, I would say,” Sato said. “Lots of things done and lots of thing to be tried, and I think over the course of two days we learned a lot. Great car, definitely more exercise for the drivers, definitely busier with low downforce.

The top 15 drivers were separated by less than four-tenths of a second around the one-mile oval as there was plenty of traffic and a few close calls but no major damage in the final hour.

Rookie Matheus Leist was a thrill show all by himself in Foyt’s other car as he caromed off the Turn 2 wall 90 minutes into the evening session, then came back and twice made light contact with Turn 4 during the final half hour.

Another brief yellow involving @matheusleist and a slight contact with the Turn 4 SAFER Barrier, we’re back to green. #INDYCAR pic.twitter.com/A09DdyRlny

But the 19-year-old Brazilian still wound up 12th overall out of 22 cars and made a couple of spectacular passes in between his incidents.

“We were just in traffic, there. It was our second or third lap out of the pits,” said Dixon, who still finished with the seventh-fastest lap. “A couple of the Andretti cars got by and were a little bit slower. I got low in (Turns) 1 and 2, touched the throttle and had a bit of a run and lost the rear. Kind of late in the corner, but just touched with the rear and bent the left rear suspension.” 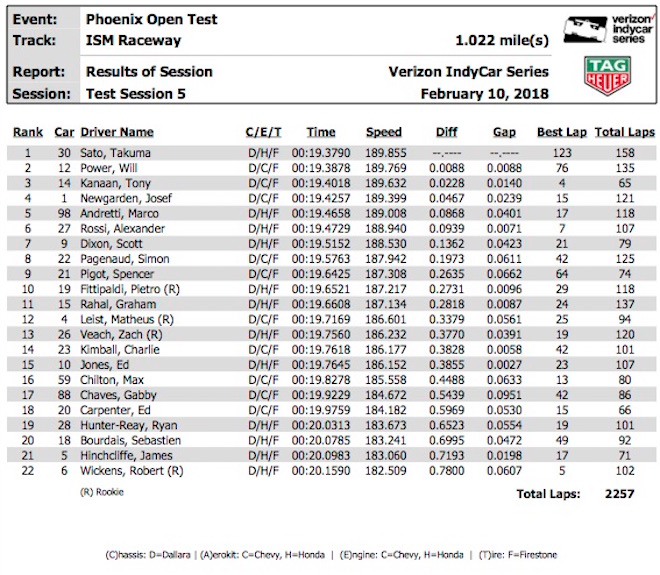