Rahal’s 189.090mph was the fastest time of the test up to this point, and put him fractionally ahead of teammate – and afternoon session leader – Takuma Sato, who posted 189.065mph.

“So far so good,” Rahal told RACER. “We’re not ‘there’ yet, but the good thing is it seems like our car, as well as Takuma’s car, has good pace. We’re not totally out to lunch on the balance. I wouldn’t say I’m happy. It’s a different car to drive. You have to anticipate everything far in advance of what it’s going to do.

“Earlier today, I went out for my first lap, lifted in Turn 1 to where my brain felt I should lift – where we would last year with the aero kits – and the car just didn’t slow. It doesn’t have all that drag to slow you down like a parachute when you lift off the throttle. It takes a minute to reprogram yourself, but so far, we should be pretty pleased.”

Teams took full advantage of track conditions comparable to what they’ll find when they return here to race in April, with Newgarden completing a session-high 123 laps over the three hours, and Sato and Will Power both topping out at more than 100.

As was the case in the afternoon, there were several brief spells under yellows, but only one was caused by a car being somewhere that it wasn’t supposed to be. The car in question belonged to Foyt rookie Matheus Leist, who had to be retrieved after a spin in Turn 2. 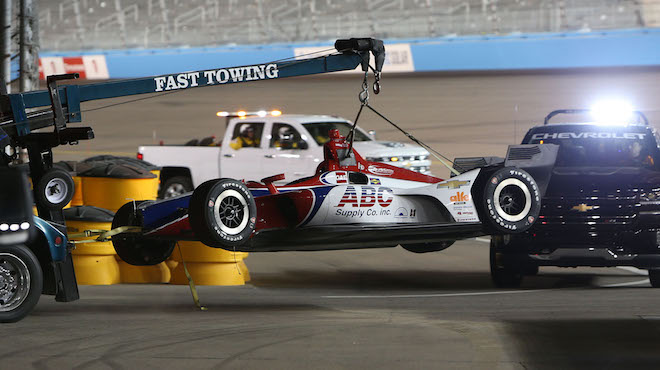 “I was just doing some race stints,” he said. “Tony [Kanaan] was coming out of the the pits, I was behind him, he stopped too much into T1. I was carrying a lot of speed, and I lost the rear and spun to the inside.”

Fortunately, the Brazilian didn’t hit anything, and he went on to finish the session as best of the rookies in P10. 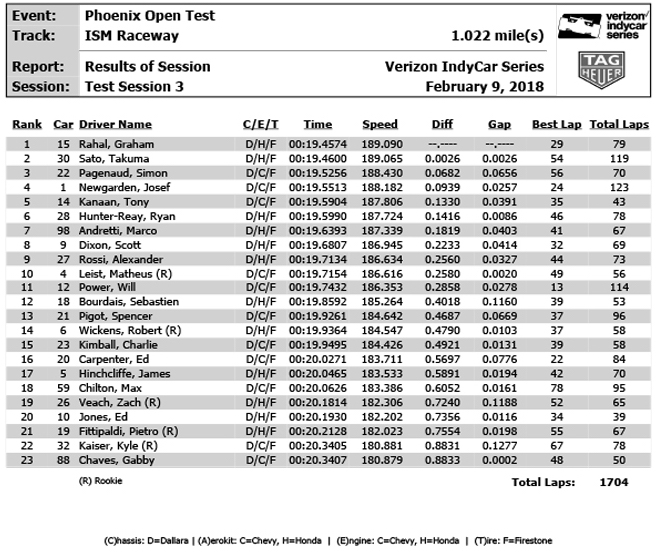