Leist completed 63 laps with a fastest lap of 184.236mph, putting him just ahead of newly-signed Coyne driver Pietro Fittipaldi’s 183.347mph.

Robert Wickens’s No.6 Schmidt Peterson Motorsport car was third-fastest, although one small detail that eluded the scoring system was that Wickens himself wasn’t behind the wheel at the time: the 181.976mph credited to the entry was actually set by teammate James Hinchcliffe, who was shaking the car down. Wickens’ own best was not far off – 180.158mph – although the anomaly did elevate newly-promoted ECR full-timer Spencer Pigot to third overall among those officially participating in the test.

Zach Veach (Andretti Autosport) and Kyle Kaiser (Juncos) both fell just short of the 180mph mark, although Kaiser in particular had a productive afternoon with 114 laps completed – more than anyone in the field other than Fittipaldi.

Marco Andretti made a cameo on the rookie sheet when he completed an 18-lap shakedown in the No.26 Andretti car, while Gabby Chaves opened Harding’s first full season by covering 27 laps with a best of 174.314mph. 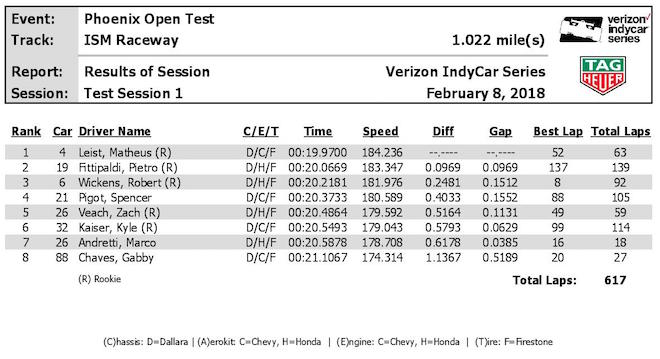