Graham Rahal feels like the test teams for the new aero kit got a distinct head start on everyone else, but doesn’t think it’s going to have an adverse effect on his Rahal/Letterman/Lanigan team.

“I think it’s a clear advantage for them,” Rahal said of Penske, Schmidt, Ed Carpenter Racing and Ganassi, which handled the initial manufacturer testing of the new bodywork. “But, to be honest, Schmidt was a team that had a lot of testing; the first test, we were quicker than them. I don’t see that as detrimental to us, I guess is my point.

“I think with good quality engineering staff, with a great team around us, drivers that are capable of getting up to speed quickly, I feel like we’ll be right in the hunt right away.”

The 29-year-old veteran has come into his own during the past three seasons with five victories and eight podiums, and carried Honda’s flag in the championship despite RLL’s one-car status. And he expects more of the same in 2018, particularly with the return of a second full-time car for Indy 500 winner Takuma Sato.

“Clearly a Penske, Ganassi, a team of those statures that have had a lot of off-season testing, it might help them,” said Rahal. “But I think, as you guys saw with our team in 2015 when a lot of Honda teams were struggling, we made no excuses; went out there and performed really well. I think that’s going to be our attitude again.

“I don’t look at us in any different light. I believe we should be able to go to St. Pete and we should be able to win. Frankly, there’s a lot of testing. I mean, I’ll go to Sebring at least a couple more days, I’ll be in Barber a couple days, we’ve got Phoenix. There still is quite a lot of testing. I think we need to look beyond the excuses and just focus on what’s next.” 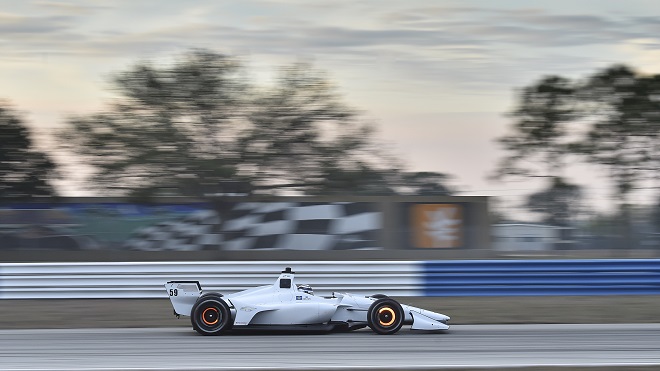 Data from the manufacturer tests was intended to be shared across all non-participating teams in the hope of removing any disadvantage from not being on-track, but Rahal said that he was taking that early data with a grain of salt.

“Was the data shared with us? I would say some of it,” he said. “We all have to remember it’s fairly easy to fudge data a little bit. My point is, the distances or things like that, the data sets that are getting sent, are they accurate? Doesn’t mean they always are. Thanks to Honda, they share with us. We don’t get the setups, but we get the basics we can learn from. Takuma and I need to drive the cars, we need to develop our own opinions, and we need to go racing.”