CRANDALL: Time to be bold

CRANDALL: Time to be bold

I love the NASCAR Media Tour. Every January, the assembled media gets stuffed into a large windowless room inside the Charlotte Convention Center for two days, and presented one driver after another. It’s feeding time at the zoo: drivers sit in a makeshift booth and are subject to discussing whatever the group wants to know.

The food isn’t great, but it is free. The air conditioning, nine out of 10 times, is turned on too high. Everyone is excited. But, yes, I love the NASCAR Media Tour.

To me, the Media Tour is about the closest we come to hearing drivers predicting or guaranteeing any sort of success; a NASCAR equivalent of Jalen Ramsey from the Jaguars saying – before the AFC Championship game had even been played – that his team was going to win the Super Bowl.

Grandiose plans for the racing season ahead fill the brisk Charlotte air each year. Take Ricky Stenhouse Jr. for example.

Stenhouse drove his No. 17 Ford into Victory Lane at two of last year’s four restrictor-plate races – the spring Talladega race, and the July race in Daytona. Those results have translated into growing confidence, and with the power of Roush Yates Engines, Stenhouse has a new mindset going into this year’s Speedweeks events.

“I definitely want to win at other race tracks, but going into the [Daytona] 500 I feel a lot more confident than I ever have,” Stenhouse said. “I always went into the 500 thinking, ‘Hey, let’s get off to a good start. Let’s have a good points race.’ I never thought about winning the 500. I just thought that I was competing in it and if I won that was cool, but I didn’t really feel I had the confidence that we could.”

OK, that wasn’t exactly a guarantee from Stenhouse, but it was strong enough. And Stenhouse doesn’t need to call his shot, because I will with my first bold prediction for this season:

Unfortunately for Stenhouse and his group, my track record with these types of things isn’t so great. However, that’s not going to stop me from offering up a few more.

I said I was going bold, right? Elliott has been knock, knock, knocking on the door of a win since he first came into the Cup Series full-time two years ago. But Elliott hasn’t, and now an additional challenger enters the fray, from within his own team.

The new driver of the No.88 wants to succeed, and he got a taste of what it’s like running up front during his 2016 stint in the car. Not closing out Phoenix from November ’16 still sticks with Bowman, and he can’t wait to try and redeem himself in March. But whether it’s Phoenix or someplace else, Bowman will score first.

Hopes are high in both camps, but I’m here to keep things realistic. Yes, the Camaro is expected to be a coup for all Chevrolet teams, but a car body alone isn’t going to push RCR and RPM to the next level, and certainly not make them championship contenders. So no, Ryan Newman and Austin Dillon will not be stealing wins this year, and Darrell Wallace Jr. will have a hard-fought rookie season.

The No.22 team is championship-caliber, and it is not going to stay down for long. After instant success upon Logano’s arrival in 2013, the team possibly needed the trials of 2017 to serve as a dose of reality for how hard this series is.

An encumbered win at Richmond led to a much-discussed downslide. Now comes the rebound. Logano and company are focused and determined to get back to their winning ways, and they will with a third berth in the title race.

The final four will be Truex, Kyle Busch, Hamlin and Logano. And then mark me down with Kyle Busch and the No. 18 team winning the championship in 2018.

Busch is like a lover scorned going into this year, feeling that he was better than Truex last November in Homestead, except Truex had the track position. Had the roles been reversed with Busch out front, he believes “we would have drove away and we would have won by four or five seconds.”

Sure, making it to Homestead three-straight seasons might be an accomplishment to some. However, Busch is quick to point out it doesn’t mean a lick if you don’t win the championship. With such a chip on his shoulder, Busch is a fuse just waiting to be lit in Daytona. 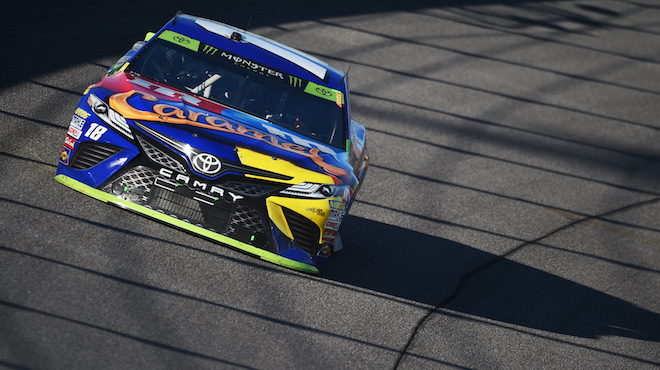