After missing 2017’s Rolex 24 At Daytona, AJ Allmendinger is back in the Florida endurance classic for the 12th time in 13 years. Like all his previous Rolex 24 starts it’s with Michael Shank Racing, but this will be the NASCAR regular’s first race in a GT car rather than a Prototype. Allmendinger is co-driving the No.86 Curb Records Acura NSX GT3 GT Daytona entry with Katherine Legge, Alvaro Parente and Trent Hindman. 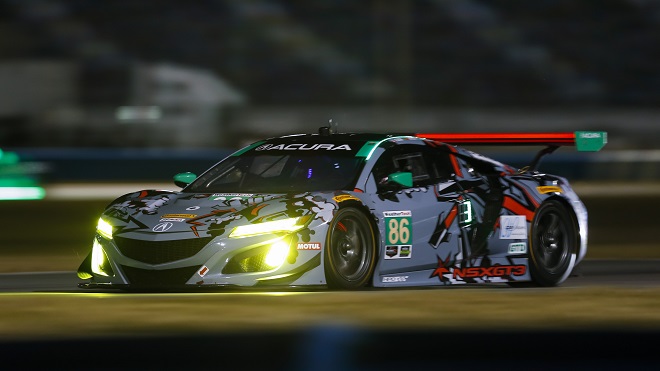 Allmendinger has finished on all three steps of the Rolex 24 podium for the team. He was second in his debut in 2006, took third in 2013, and scored the overall triumph with Ozz Negri, Justin Wilson and John Pew in 2012. When Shank (pictured at left with Allmendinger, top) had a seat available for this weekend, Allmendinger quickly accepted.

“Mike is one of my best friends, and I’d do anything for him. I associate this race with Mike,” he said. “When he told me that Honda wanted to put some of their IndyCar guys in his car last year, I didn’t go out looking for anything else. I enjoy the race for so many reasons, but the biggest is racing for Mike, all the memories we’ve shared, the good and the bad, heartbreak and the ultimate victory.”

“Overall, it’s the Rolex 24. It’s such a prestigious race, and I love being here. Any time you get to compete against the best in the world, I’m always up to that challenge.”

His team owner had no worries about Allmendinger competing in a GT car.

“First time in the car, and he went right to the top of the speed chart,” noted Shank.