As a fixture in the ALMS, Grand-Am, and more recently, the rebooted IMSA series, the Andretti Autosport driver has experienced the best and worst attributes in each championship since making his endurance racing debut at Sebring in 2002. It makes his enthusiasm for all the WeatherTech SportsCar Championship has to offer in 2018 one of the better endorsements for IMSA’s rapid return to prominence.

“I’ve never seen anything like it on the sports car side,” the Wayne Taylor Racing Cadillac DPi driver told RACER. “It’s so great to see after all these years that IMSA does have a lot of strength going right now with manufacturer support, car counts, and it’s a series that, if you go to a race, you can’t not fall in love. There’s everything your eyes want – you can’t stop looking and ogling everything that’s going on.”

There was a time in the 1980s and the early 1990s where IndyCar and IMSA drew from the same fanbase. With both series in the midst of golden eras, enthusiasts consumed CART’s open-wheel and IMSA’s GTP sports car racing with voracious appetites as amazing cars and popular drivers produced exceptional memories. As a lover of IndyCar and IMSA, Hunter-Reay hopes the same phenomenon will return for today’s fans.

“You take a camera with you at an IMSA race, and you’re going to come back with several hundred photos because it’s just nonstop eye candy, and great racing, too,” he said. “All the names we have coming to Daytona, all the big new teams like Penske and Joest coming out to play… and the rest was already incredible. So there’s not many barriers I can think of for IndyCar fans to enjoy. IMSA’s got everything.

“And it’s so great to see IMSA with this strength and the direction that it’s headed. I’ve always been a part of that series and big into this form of racing. And I really like the direction IndyCar is headed; it’s been on the right path for a while, so both get two thumbs-up from me. Things are going great with my two favorite series, and I get to drive in both. I love it.”

Having raced all manner of prototypes and GT cars since his first Mobil 1 Twelve Hours of Sebring appearance, the hardcore competition and visible growth in the WeatherTech Championship’s three classes have also caught RHR’s attention. 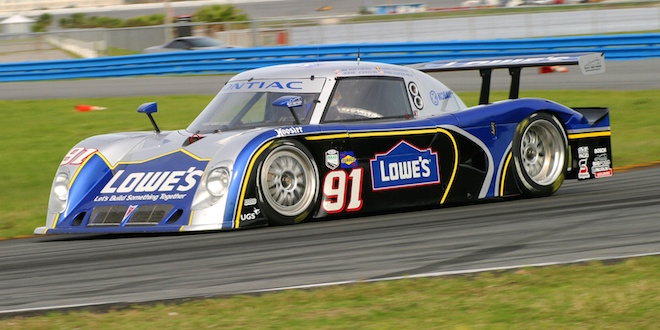 “Obviously, we had big Daytona Prototype [car] counts at one point, and the racing was great…but they were Daytona Prototypes [above, in 2007],” he said. “They didn’t look the part or go that fast at many points. And to see all these beautiful DPi and P2 prototypes out here now – 20 cars – it’s amazing. You slip up just a little bit behind the wheel and all of a sudden, you’re P10 or P11.

“It’s outstanding, and to see the strength of the GTD class, I mean, it’s just loaded with manufacturers and driving talent. And then GTLM is absolutely one of my favorite categories, but now for prototype, with all these manufacturers in there and the list of drivers… You looked up at the timing and scoring at Daytona and, at one point, I didn’t know if it was a Formula 1 qualifying or IndyCar qualifying or what it was. The teams and drivers here are seriously brutal.”

Of the many things that moved Hunter-Reay with the new-look IMSA, the feeling in the air at the Roar – the frigid air, admittedly – set the tone for what’s expected at the Rolex 24 and beyond.

“The atmosphere – you could feel the energy, and not only from the people that are working on the teams, the crews, the drivers, but the fans,” he said. “The infield was packed, and it was in the 30s every night. That’s some serious dedication. It really is, and I can’t wait to see the turnout at the race. Hopefully we have some good weather to really boost it, but the fans are excited, the energy in the paddock’s really amped up, and there’s a lot at stake here.

“I was talking to Wayne Taylor about it, and he said, ‘This is really serious now. This is a big, big time race, more than it’s been in a long, long time.’ It always has been, but with all the cars and you think about the manufacturers and the teams involved and the drivers, the lineups that are in there. Man, it is absolutely something special. I’m counting down the days until I pull back in that track and get ready for the 24.”