Takuma Sato’s eight-month Indy 500 victory tour reached its pinnacle on Wednesday evening when he and Michael Andretti were presented with their Baby Borg trophies at the Automotive News World Congress Dinner in Detroit.

“It’s been an unbelievable journey, and for the last eight months it feels like it hasn’t stopped for a single moment,” Sato told RACER.

“Immediately after I crossed the finish line at the Indianapolis Motor Speedway, my body has belonged to somebody else – you have to just go on and on and on. Which is fantastic, I really appreciate it all, but today, after eight months, to finally hold my Baby Borg Warner Trophy is really special.”

Formal celebrations for Sato’s Indy win extended all the way to his native Japan, where he accompanied the BorgWarner Trophy on its first-ever trip outside of the United States for a two-week tour late last year. But now, he says, the Baby Borg presentation marks the end of reflection on his success last May in favor of preparations for the 2018 season and his return to Rahal Letterman Lanigan Racing.

“I’m going back home with RLL and there are some familiar faces there, but there are also some new people that arrived since I was there in 2012,” he said.

“But we’ve worked hard together for the last couple of months to really start building towards the 2018 season. So this is really the last occasion for celebrating my win with Michael, and what we achieved together at the 2017 Indy 500 is fantastic. So this event is one of great joy, and after this it’s time to focus 100 percent on 2018. It’s going to be an exciting year, and I can’t wait to get back behind the wheel.” 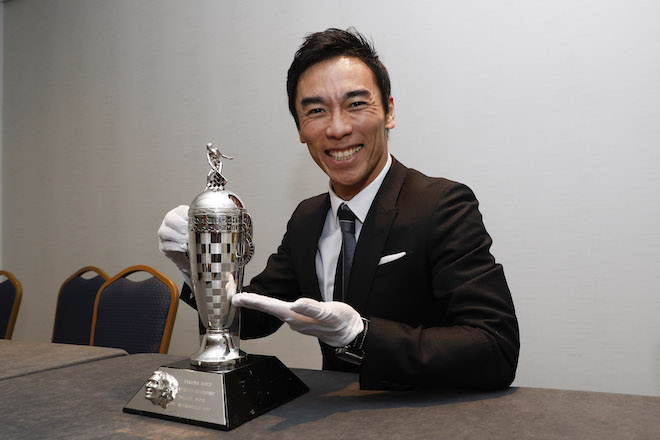 The 2017 Indianapolis 500 marked Andretti’s fifth Indy victory as a team owner, and third from the past four years.

“What’s going to stand out about this one is, we are again part of history where it’s the first Japanese driver to win, and for him to do it with the Honda engine is big,” Andretti told RACER. “And I knew it was going to be big, but it ended up probably being even bigger than I thought it was going to be. Especially in Japan; it was a huge, huge deal, and it was special to be a part of that.”

Sato’s move to RLL means that Andretti Autosport will have to look elsewhere in its quest to continue its strong recent record at the Speedway, but with the full-time line-up of Ryan Hunter-Reay, Alexander Rossi, Marco Andretti and new arrival Zach Veach set to be reinforced by additional Indy-only entries for Stefan Wilson and Andretti returnee Carlos Munoz, Andretti feels good about the team’s chances.

“I’m really excited about our line-up,” he said. “With Indy we have a really strong line-up, with six quality bullets in our gun. We’re working really hard as a team and we’re putting in a big effort, and hopefully it’s going to pay off. Wining three out of four is almost unheard of, so to think that you’re going to go out and win four out of five… it’s going to be really tough. But we’re up for the challenge, and I think we have really good quality drivers, really good quality engineers, and really good quality people all the way through our team. So it can happen. We feel as a team that we can go out and do it.”

The Baby Borgs, which are miniature replicas of the Borg Warner Trophy, stand 14 inches high and weigh five pounds. Valued at $50,000 each, they were first awarded in 1988, with Rick Mears the first recipient.