'We have all the pieces to win a championship' – Larson

'We have all the pieces to win a championship' – Larson

For the second time in three months, Kyle Larson had an engine blow at the most inopportune time.

Saturday night, it was while he was leading the Chili Bowl. Victory in the most prominent Midget race of the year is a wish-list item for Larson, but the quest continues. This past October, Larson had blown an engine in his No. 42 Monster Energy NASCAR Cup Series car at Kansas Speedway and failed to advance in the playoffs.

Kansas, said Larson, stung more than the Chili Bowl because a driver never knows how many opportunities they will have to win a championship. With the Chili Bowl, he knows he’ll always have good enough cars to have a shot at the win.

But with that said, what happened to his championship chances in NASCAR last season is not nagging at him.

“It’s [put] to bed, there’s nothing you can do about it,” Larson told RACER on Tuesday. “No, [Kansas] doesn’t haunt me because even if I didn’t blow up, I didn’t win Homestead. If I had won Homestead maybe it would have hurt a little more, but I didn’t win. I feel like I do a good job at getting over things.”

Larson’s success last season was in a sense his coming-out party in the Cup Series. Guided by Chad Johnston, the team reached single-season career-highs in top-10 finishes (20), top-five finishes (15), poles (three), wins (four) and his overall points finish (eighth). Until his playoff elimination, the NASCAR garage viewed Larson as a championship contender.

Having tasted that success, one would assume the sky is the limit and that Larson has even higher expectations this season. Not so. The 25-year-old is keeping a mild attitude about having a clean slate starting next month in Daytona. 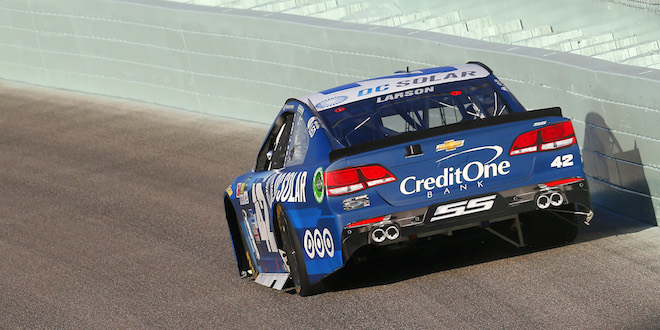 “Last year I felt like we exceeded my expectations from the offseason,” he said. “You never really know how you’re going to start in our stuff. The offseason, man, it can go either way for you. You can have an offseason like we had last year where you start the year really good, or you can have an offseason like in the past where you have high expectations and it takes you half the season to reach those kind of runs you were hoping to start the year out with.

“It’s hard for me to really set any expectations until we get a couple races into the season, where you get a better idea of how your car is. Right now, I’d say knowing if my cars are as good as they were last year, if we could go out there and win at least four races again, that’d be great. You don’t ever really know, unless your Martin Truex Jr., how you’re going to be next year. Once you get through the West Coast swing or through Phoenix, then you can kind of get a better idea of how you’re going to be.”

What Larson can say for sure is what he’s known since last year before his engine expired, he has all the pieces in place at Chip Ganassi Racing to win a NASCAR championship.

“Yes, I do. I, for sure, feel like we have all the pieces to go out there and win a championship; we almost did it last year,” Larson said. “My race team is pretty much the same, or road crew-wise is the same, and I feel like we’ve hired on some more people in the shop that make our organization even better. I feel like we keep growing each and every year, so I definitely think we have the tools and resources money behind us to go out there and contend.

“We just got to work hard to get better and better every week. It’s a long season; it’s crazy how long our year is and how things can change throughout the year. But if we stay on top of it all, I feel like hopefully we can have a shot again. But you never know until you get in the season.”