CRANDALL: Fun times ahead for Hendrick

CRANDALL: Fun times ahead for Hendrick

Even with a dozen NASCAR Cup Series championships and multiple wins in each of the sport’s biggest races, Rick Hendrick still finds ways to keep things interesting.
For 2018, he has achieved that with a fresh lineup of two new drivers and a number change. It’s a new era at Hendrick Motorsports; one that has its mastermind bubbling over.

“I’m excited,” said Hendrick. “Just like seeing Jeff [Gordon] come along. I’ve watched William [Byron]. I like to see Alex [Bowman] in the car full-time. So, I’m excited about it. It’s going to be fun. I think the word is going to be ‘fun’. I’m ready for some fun.”

Kasey Kahne’s six-year tenure at HMS ended in November, paving the way for 2017 Xfinity Series champion and phenom William Byron (below). Alex Bowman inherited the No. 88 from a retiring Dale Earnhardt Jr., a reward for his work with HMS and having acquitted himself well during a stint in the car in 2016. And in addition to paint schemes changing, Chase Elliott goes into his third season as the driver of the No. 9, a number his father once made famous.

So, plenty to get used to. But this is not entirely uncharted waters for the team.

And the door has always opened and closed on drivers. NASCAR is a business, after all. Going back over the last few years, it’s easy to trace the changes: Elliott replaced Jeff Gordon. Byron replaces Kahne. Kahne replaced Mark Martin. Martin took over the car from Casey Mears – who came in after Brian Vickers. Dale Earnhardt Jr. took the place once held by Kyle Busch, who had done the same from Terry Labonte. On and on it goes. 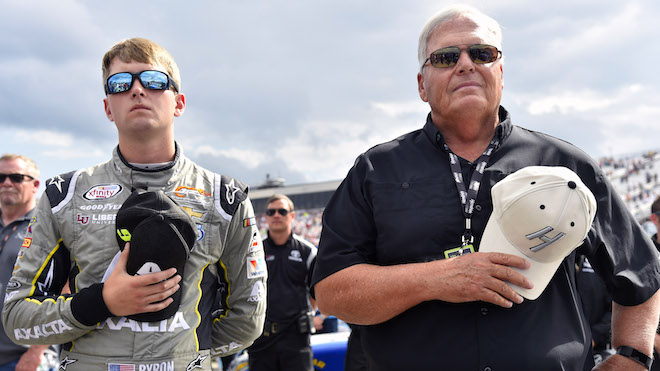 Half the HMS roster be different going into a season is new, though. It’s Jimmie and the kids. The seven-time champion is now the leading man, having graduated from student [under Gordon], to the teacher.

“I’m here for those guys,” Johnson said. “I know through my experience; just watching Jeff Gordon taught me a lot. It could be as simple as being around and seeing how people carry themselves, to actually sitting down and working through a given topic.

“I am aware that he [Byron] is paying attention, and Alex is. I need to lead by example on a lot of fronts, but at the same time, we might have to sit down and talk through some things, too.”

Some might view this year as a rebuilding season, or at least, figure in an adjustment period. But HMS expects results regardless of the variables. Elliott, the perceived leader of the next generation, is also developing into a championship contender even as he still kicks at the door to Victory Lane.

Byron is a superb talent, no doubt. Not only has he fast-tracked through the NASCAR ranks, but along the way, he has proven he deserves every seat he’s sat in. Now comes the hard part: doing it on the biggest stage, and in one of the most recognizable car numbers.

The challenge for Johnson will be to provide the teaching moments for all the above, while also trying to reach history in winning an eighth championship.

Hendrick may be on to something. “Fun” is definitely the watchword around his company this year. 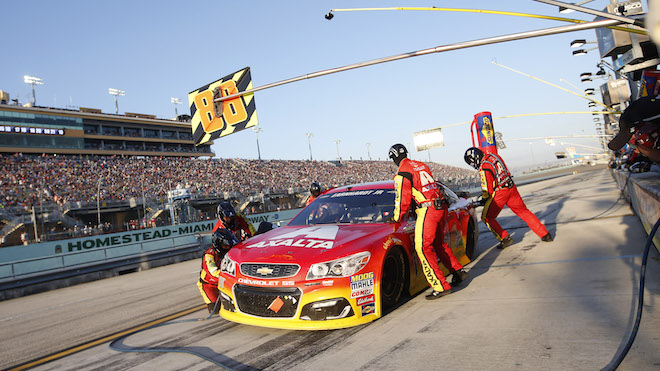