Acura Team Penske closed its first major outing in IMSA with the second fastest lap set among the four DPi constructors, and with the Roar Before the 24 in the rearview mirror, its speediest driver says the Captain and the Japanese brand are in a good place with the Rolex 24 at Daytona on the horizon.

“Nobody joins Team Penske without expecting to win races and win championships right out of the blocks,” Dane Cameron told RACER. “I know it’s almost a cliché by now, but that’s really how everyone thinks inside this program. I’ve seen that from our very first tests all the way through last weekend at the Roar.

“Of course we’re learning every day, but what I saw at Daytona was a team and a manufacturer that’s preparing to win the Rolex 24, and I think that’s crucial. I think that’s what makes Team Penske so successful; everything they do is about winning. We don’t really talk about any other outcomes.”

Cameron’s tone while discussing the team’s mindset was far from arrogant. Some teams go into a major race like the Rolex 24 hoping to do well; inside Roger Penske’s world, hope is a dirty four-letter word. The team, even as a brand-new entrant in the WeatherTech SportsCar Championship, is held to the same lofty expectations found within Penske’s IndyCar and NASCAR operations, and as such, Cameron has seen direct parallels in the Acura DPi program.

“We’ve done a lot of testing with the cars already, but the Roar was really the first time to see how we work and fit in with the other teams, and it was really impressive to observe,” he said. “We’ve got chief mechanics who’ve been in IndyCar for like 20 or 30 years, crew from IndyCar, guys who were on Roger’s [Porsche] RS Spyder [ALMS] team that won all those championships, and that’s where you see the difference in action.

“You can say that Acura Team Penske is new, but not really from the inside. Everyone knows each other well, they work like they’ve been doing this in DPi for years, and that’s what you want when you’re trying to win your very first race together.” 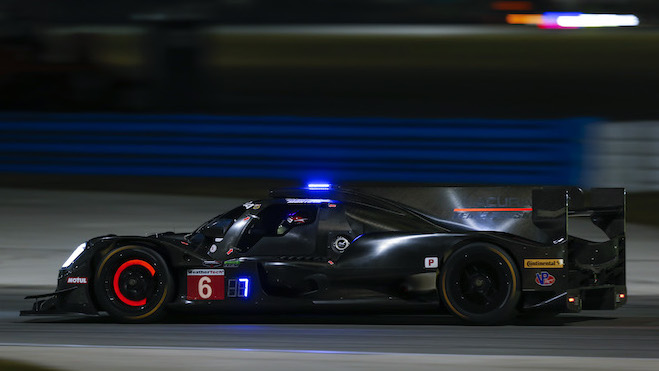 Cameron registered the best lap for Acura during Sunday’s “qualifying” session at the Roar, which fell directly behind the four Cadillac DPi-V.Rs, but that lap was also more than one second slower than the session-leading GM prototypes. If Cameron and his teammates intend to deliver a debut win for Acura and Penske on pure pace, IMSA’s Balance of Performance tables for the Rolex 24 will likely hold they key to their outcome.

“I wish we had more to show, but we don’t; I was giving it all I had in that session,” he added. “It’s hard to know where everyone stands, but the timing information showed the Cadillacs were not only fast, but they also had more top speed than everybody, so if some of that comes back our way for the race, I think it will be a lot closer between us and them. We were quite good on the infield, but not so much on the straights.

“We can do some homework on our end to find areas where we can be better, so we’re looking inward as well, but I think IMSA will play a part in adjusting the speed of some cars to erase the bigger difference we saw in the sector data and top speed data. All anyone is looking for is that balance – striking the right balance – so all the cars can be in the hunt for the win.”