Measured optimism for Mazda after Roar

Measured optimism for Mazda after Roar

The debut of Mazda Team Joest was among the more anticipated aspects of last weekend’s Roar Before the 24 at Daytona International Speedway. In its new guise led by team manager Ralf Juttner, the completely revamped Mazda RT24-P DPis and its surrounding program came away from the Roar with a decidedly different view compared to its results at last year’s big Daytona test. The outlook within the team, according to veteran driver Jonathan Bomarito, is one of measured optimism.

“We came away wanting more speed, but overall, we were pretty happy with how everything went for us,” he told RACER. “Keep in mind this is virtually a brand-new car, the team running the cars are new, most of the drivers are new, and for our first time out together with everyone else at the Roar, we left feeling positive about almost everything that took place. There’s more to come, but overall, it was a lot different than how things went for us last year.”

Where the 2017 Roar was memorable for Mazda with frequent problems – everything from suspension failure to engine and gearbox troubles that kept the RT24-Ps parked for long stretches – the new-look Mazda Team Joest outfit returned to the 3.56-mile circuit with most of the kinks worked out of the cars. 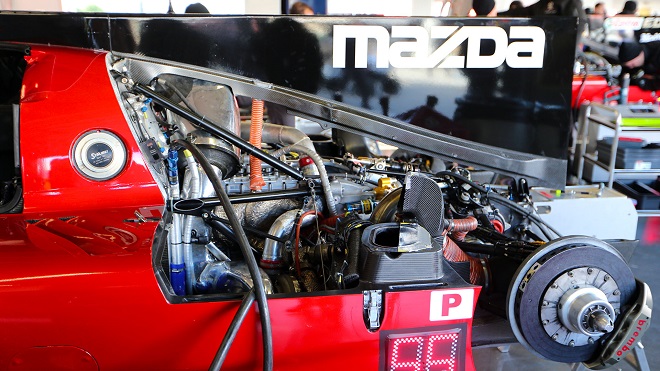 Extensive aero and suspension updates by chassis builder Multimatic, drastic cooling improvements and a significant weight reduction by the same firm, and upgrades by AER in the engine bay meant the Nos. 55 and 77 Mazdas spent the majority of the time on track. Other than missing the first session to fit new parts that arrived later than planned, Bomarito says he was encouraged from the three days in Daytona as he got to witness the strength of the American-German squad in action.

“To be there for the first official event as Mazda Team Joest, I thought the guys did a great job,” he added. “One of the hard things with the event is they kick the crew out pretty early each night, which is good and bad. It gives people more sleep, but it also limits the time to prep the cars, so it means you have to be really sharp at planning ahead – which is what Mazda Team Joest is really good at.

“That plays into our advantage, and there are times when you run into situations where you could use more time. I’ve seen at some tests already that our guys are ready to work all night – however long it takes – to get things done. One thing you know about the Mazda Team Joest crew is they are willing to do anything it takes for us to succeed. They’re so thorough. Whether it’s a tight time period like at the Roar or pulling all-nighters somewhere else, we know our guys are dedicated 100 percent to making us better and faster.” 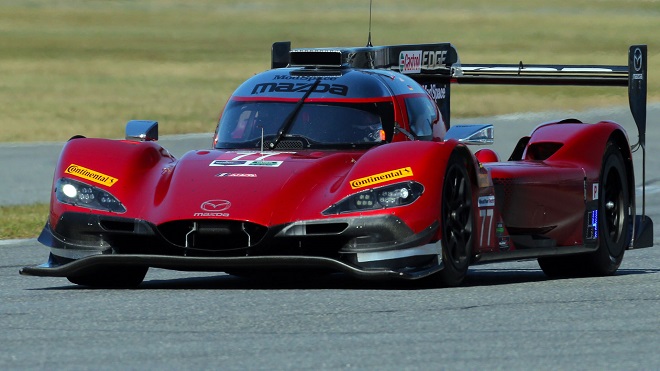 The Mazda program finds itself in an interesting place among the DPi manufacturers. Although the cars spent just over half a season being campaigned by SpeedSource Race Engineering in 2017, the dismal results with execution, reliability, and overall performance necessitated a change in teams and a vehicle-wide overhaul by July.

The net effect, despite all they might have learned last year, is a brand with a car that looks radically different beneath the bodywork and a team that is new to IMSA WeatherTech SportsCar Championship competition. Although Joest’s name and reputation would suggest the RT24-Ps should be capable of taking down the Cadillac DPi-V.Rs from the outset, a more realistic benchmark for Mazda might be the incoming Acura Team Penske ARX-05s.

“I think that’s a fair assessment,” Bomarito said. “I mean, we want to be faster than the Cadillacs, so there’s no lowering of expectation by us, but this is more like a Year 1 program for us than any kind of continuation of what we started last year.

“We can’t even look at chassis setups from last year to help us now; the front suspension geometry is completely different, the spring rates are different, the rear suspension is different, the underbody aero is different; it’s like a brand-new car with a start-up team. We’re essentially starting from scratch. It’s the same thing for Penske, and we were very close to them at the Roar, so that’s encouraging.” 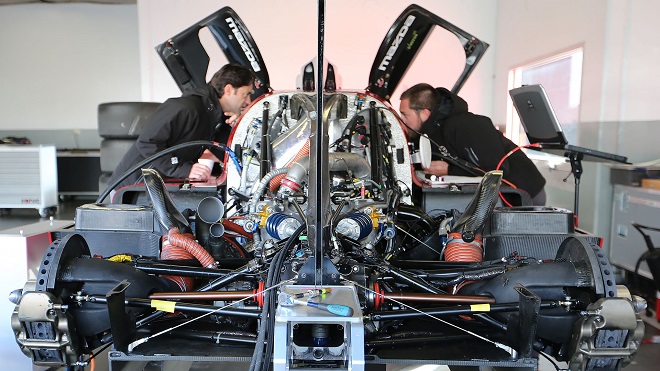 In Sunday’s “qualifying” session where teams vied for the top spot in order to earn first pick at pit lane and garage positions, the four Cadillacs swept the top four, with Action Express Racing’s Felipe Nasr setting the fastest lap ever turned in modern IMSA competition at 1m35.806s.

First among the non-Cadillacs was Dane Cameron with his Acura (1m36.988s), a full 1.182s slower than Nasr, and behind Cameron, Ricky Taylor’s Acura, Tequila Patron ESM’s Pipo Derani in his Nissan Onroak DPi, and Harry Tincknell in Bomarito’s RT24-P all lapped at the same 1m37.2s pace.

With the Acura, Nissan, and Mazda separated by only a few hundredths of a second in P6-7-8, the Californian sees a lot of growth by his team.

“If you ran eighth last year, you were almost last; this year, if you’re in that range now, you’re inside the top half of the field, and considering how much better the field is this year, it says a lot about our progress,” he said.

“Dane was on his own a little bit, but the rest of us were very close to each other. There’s a little bit of a worry by how far ahead the Cadillacs were to everyone else; it was like there were two classes [of DPi], so hopefully IMSA brings things closer for the race. But if you look past them, the other three DPis were right together, and we were only a few tenths away from being right behind the Cadillacs.”

Outside of a healthy change to the Balance of Performance tables to slow the Cadillacs, it would be unreasonable to expect the Acuras to bridge a 1.1s gap and the other DPis to find the 1.4s they were missing when the Rolex 24 at Daytona gets under way later this month. Even so, Bomarito believes Mazda Team Joest will have more to offer when practice starts on Jan. 25.

“That’s the thing I tell the guys to keep in mind; every time we turn a lap, we learn something because it’s all so new for us,” he said. “We tested at Daytona before the Roar and learned a lot of really good things, but it was also a lot warmer. When we came back for the Roar, it was super cold, and our setups had to almost start from scratch.

“So we spent three days getting on top of the different conditions, and made a lot of progress. And that’s how I expect things to continue going for us. There’s no doubt that we want to beat all of the other cars and win the race – the same as everybody – but we’re aware that this is like our very first race and so naturally, there’s a big learning curve for us to go through.

“I think the best way to say it is that we’re treating Daytona like it’s the first race in a long season and we know we have a lot to learn. It’s the first step for us in a complex process to get Mazda Team Joest where we expect to be in a short period of time.”