Verizon IndyCar Series driver Marco Andretti turned laps in a TQ Midget in the PPL Center in Allentown, Pennsylvania, Saturday evening, in an informal test that gave him something in common with his famous grandfather: Mario Andretti won an indoor TQ Midget event nearly 56 years earlier.

Marco’s laps in the car were within fractions of second of those turned by the car’s regular driver, Kyle Lick, despite having not seen either the car nor the race track until one hour before the test.

Lick, from nearby Lehighton, is a friend of Andretti’s from their go-kart days, and it was Lick who offered the car to Andretti to test. The test took place just prior to the Allentown Indoor Race program, won later than evening by Scott Kruetter after the car of NASCAR Monster Energy Cup crew member Ryan Flores blew its engine in spectacular fashion while leading.

“Those things are a blast,” Andretti commented upon exiting the car, and admitted that if his contracts permitted it he would love to race one. But instead he remained on the sidelines and watched Lick race before slipping out the door to head to this week’s IndyCar testing at Sebring.

The car driven by Marco is technically a Micro-Sprint, a class of dirt-track car adapted to race with the TQ Midgets and powered by a 600-cc motorcycle engine. The purpose-built TQ Midgets are slightly heavier and powered by 750-cc bike engines. 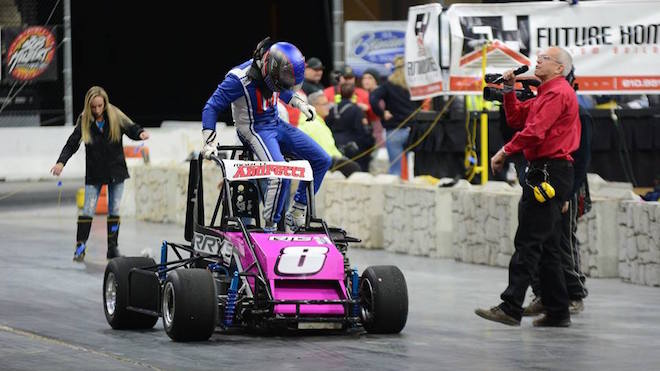 The race track is laid out on the bare concrete floor of the arena, with Coke syrup sprayed onto it to permit lap times in the 8.0s range. The Allentown race is one of three two-day indoor events this winter, with subsequent events in Atlantic City, New Jersey, later this month, and Albany, New York, next month.

On March 3, 1962, Mario Andretti was racing a TQ Midget in the Teaneck, New Jersey, Armory, when he won what he later described as his “first victory of any consequence,” because it brought him an offer to drive an Offenhauser Midget the following summer. Altogether, Mario won four TQ Midget races at the beginning of his climb to the top echelons of racing in the U.S. and worldwide.