Formula 1 star Fernando Alonso came away from the Roar Before the 24 satisfied with his progress, even though his United Autosports team’s pair of Ligier LMP2 cars were well off the front-running Prototype pace. The two-time world champion was 12th in Sunday’s “qualifying” session that determined pit positions for the Jan. 27-28 race, but the Spanish ace approached the weekend of testing at Daytona International Speedway more as a fact-finding mission than an immediate search for speed, and he seemed to like what he found out.

“I think it was a positive weekend. Obviously, it’s nice to have the first time in the car and experience the circuit for the first time, small things that you keep learning lap by lap,” Alonso related. “It was a good weekend to work with the team, the teammates, and entering this mood of sharing everything – adapting and making compromises between us. That was the main priority for the weekend and that’s what we achieved.

“Probably the biggest surprise was the little time you spend in the car – the sessions were not very long and you share the car, so you lose a bit of time in the driver changes, the setup changes, so you end up doing very few laps. But that’s part of the game and in the 24 hours we will accumulate enough laps, for sure.”

Part of the adaptability process included some uncomfortable moments for Alonso early on in establishing seat belt settings that accommodated himself and junior teammates Phil Hanson and Lando Norris in the team’s Ligier JS P217, but he was happy to get that resolved as the weekend went on. 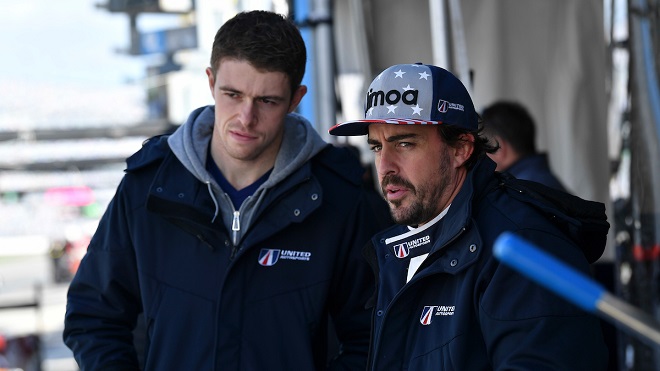 “Seat belts now are good – on all our sizes, we are all happy,” reported Alonso (at right above with fellow UA driver Paul di Resta). “There is still some tuning [to do] on the seat, because the more laps you do, the more little problems you discover. In a sprint race like F1 you can deal with that, but here you want to make sure that everything is perfect and comfortable, because you will spend many hours in the car.

“So there’s still little changes going on, and more with the performance of the car. It’s early days – it’s only testing but we need to find more pace and hopefully be more competitive when we come back for the race.”

Alonso said he found no new significant challenge in the nighttime aspect of endurance racing, at least under Daytona’s effective lighting system. 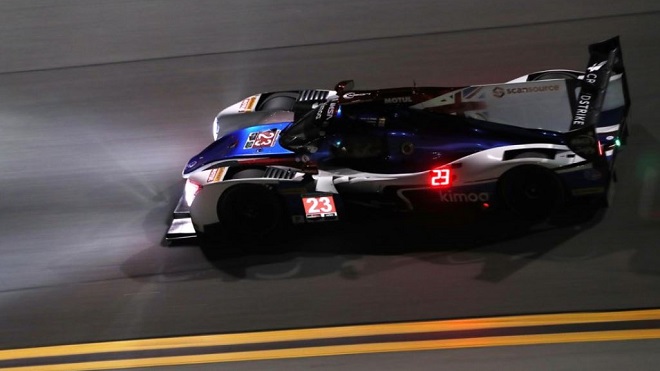 “It was good; it was not a big difference from the daytime,” he said. “In F1 we have some night racing, in Bahrain and Singapore and Abu Dhabi, and the circuit here is quite well illuminated – it’s not maybe like some other endurance circuits, so I found no big issues there. Same with the traffic, which I was a little bit afraid of. There are always some moments and some risk, when you are overtaking cars or if they are fighting each other, but that’s a normal thing that you will face, so it’s something we should be on top of for the race.”

As he did at Indianapolis last May, Alonso also said he enjoyed interracting with the American fans, many of whom came out to the Roar test bearing mementos from his first Indy 500 foray.

“They were great – again a very nice welcome,” he said. “A lot of IndyCar fans as well, bringing the IndyCar replica to sign – a lot of ’29’ shirts as well. That was good to experience once more. I’m really looking forward to the race, because that will be even more close access for the fans in the garages and everything. That spirit and atmosphere that we liked in Indianapolis is the same here, so that’s always a positive.”