Toto Wolff has warned Mercedes against complacency despite retaining its constructors’ championship title across regulation changes.

The new aerodynamic regulations introduced in 2017 were seen as a major threat to the recent dominance enjoyed by Mercedes since the start of the V6 turbo hybrid era in 2014. However, Wolff’s team withstood a more sustained challenge from Ferrari to win both the drivers’ and constructors’ championship for the fourth consecutive season.

With the new season seeing only slight tweaks to the regulations – including the introduction of the Halo cockpit protection device – Mercedes is expected to remain a title contender but Wolff is wary of such predictions.

“I think we have a good organization in place and somehow the wheel rolls now, but having said that you must never underestimate any of the competition,” Wolff told ESPN. “It can go super quick and suddenly you are on the back foot and the car is not as good as the others. We have seen that with Ferrari, how quickly they can turn it around from a so-so season to a world championship challenger in 2017.

“So I think it’s important to stay humble, forget about your own achievements – we are taking all the stickers off the doors here saying we have won the championship, because in 2018 it all starts from zero again.” 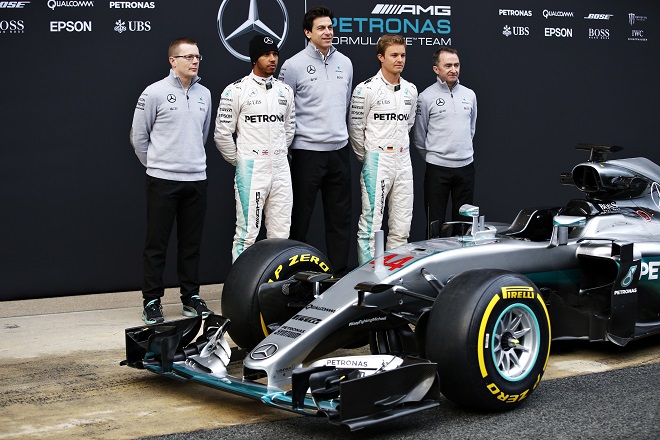 Wolff highlights the team’s ability to constantly adapt – dealing with the departures of world champion Nico Rosberg and Paddy Lowe (at right with Wolff, above) at the end of 2016 – as one of the reasons it has been successful in the past.

“I’m very proud [of 2017] because it was a difficult situation. Obviously Nico throwing in that curveball at the beginning of December was totally unexpected, and having two drivers who competed on that level was difficult to find a solution. I think how the championship panned out, Valtteri [Bottas] and Lewis [Hamilton] was probably the best combination that we could have had.

“Paddy was also a big part of the team; he was here for a long time. We had a plan so that was maybe a bit easier to cope with, but nevertheless such an important change in management always has an effect.

“A racing team in Formula 1 is not a static structure that you can freeze and say, ‘This is functioning now and is winning races and championships, now let’s freeze it.’ On the contrary, you need to adapt – it’s dynamic and up until now it has worked out.”