Sainz departure was 'a big loss' for Toro Rosso

Sainz departure was 'a big loss' for Toro Rosso

Losing Carlos Sainz before the end of the 2017 season proved to be “a big loss” for Toro Rosso, according to team principal Franz Tost.

Sainz had scored 48 of the team’s 52 points at the time of his departure with four races remaining, with the Spaniard being allowed to join Renault earlier than originally planned as part of power unit negotiations that have seen Toro Rosso end up in partnership with Honda. While optimistic about his team’s hopes for 2018, Tost admits losing Sainz was a significant moment with just one point added to Toro Rosso’s total after that time.

“It was a big loss because Carlos scored most of the points for the team,” Tost told RACER. “He knew the car, he had a clear picture about the management of the tires and he worked very well together with his team. Therefore I must says that it was a big loss for the team.” 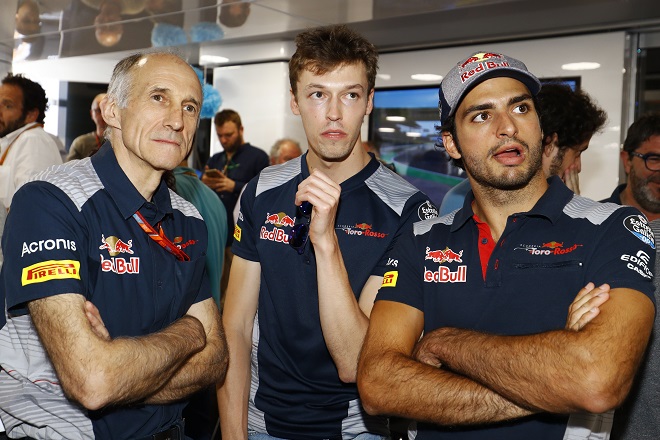 Returning to the car in the United States Grand Prix after two races on the sidelines, Daniil Kvyat then scored a point in 10th place before losing his seat permanently, but Tost (at left, above, with Kvyat and Sainz) has sympathy for the Russian after a tough season.

“I must say that I still rate him as a very, very high-skilled driver. He is fast. When he gets everything together he can be very, very fast. This is what he showed in the past – there’s a reason behind the win in the GP3 championship, winning races in Formula 3 and being on the podium in Formula 1, it all showed he can do it. But for various reasons this season both the team and also he couldn’t get it together.

“It’s not only him, it’s also our side because the car wasn’t always reliable enough and then once he lost his confidence it is difficult to come back. I think this is what happened with Daniil and I personally regret that he is not with us anymore. I hope and wish that he comes back to Formula 1.”

Kvyat has been linked with the vacancy at Williams, although the final seat on the 2018 grid looks likely to go to his fellow Russian Sergey Sirotkin.