The Porsche 911 GT3R has proven itself more than capable in Pirelli World Challenge competition. It’s also proven to be an excellent step for a team or driver coming to PWC from a GT3 Cup series, as it’s not a huge leap and it’s a familiar platform. Scott Hargrove and Pfaff Motorsports are making that jump in 2018, entering World Challenge with some backing from Porsche Motorsport North America, including a factory shoe for the SprintX races.

Hargrove competed with Pfaff in the 2017 Ultra94 GT3 Cup Challenge Canada, winning all but two races to claim his second championship in the series, the first coming in 2014. For the Canadian, moving to World Challenge with the Ontario-based team represents the sort of continuity he hasn’t always had in his racing career.

“Last year around this time when we were in talks about doing a season of GT3 Cup together in Canada, we were discussing what the plan after that was if it all goes well,” Hargrove explained. “There was no solid plan that was agreed on, but we had agreed that we wanted to move to a higher-level series after 2017, obviously depending on how 2017 went. The results were phenomenal this year, winning 10 of 12 races, so it was sort of a no-brainer that we were going to continue working together. We started looking at what series made sense for us as a team and to further my career, and Pirelli World Challenge stuck out. It was a feasible jump for the team and a good place to showcase my skill against the best out there.”

Pfaff will run a single car in GT for Hargrove, with SprintX partners to be named later, and a GTS-A Cayman GT4 Clubsport MR for Orey Fidani. The team has had the GT3R for a while and has been learning the car, with testing to start in earnest in January. Needless to say, Hargrove is itching to get started.

“I think I’ve been ready to race in a series like this for a while now,” he said. “It was a matter of making sure it was the right opportunity with the right team to go out and do the best job possible. I’ve always had the saying that I don’t want to just be on the grid, I want to be there to win. I feel like this is an opportunity to go and win. That makes everything easier – the fitness training, the travel, all that. 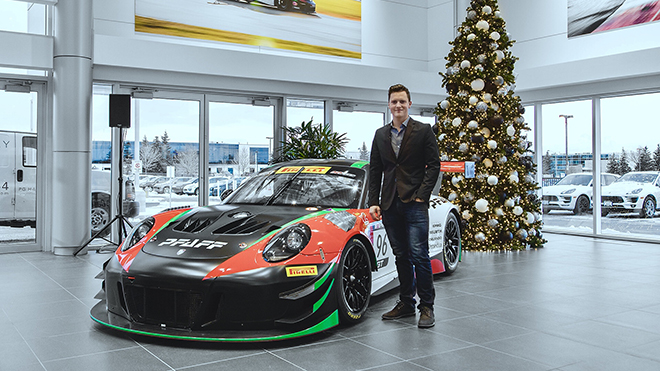 “The support from Porsche Motorsport North America has been great so far,” he added. “They’ve definitely stepped up and want to help us with our program. Supplying a factory driver, that’s almost a dream come true in itself. That’s going to be a benchmark for me to build off of. As a new team in the series, having that experience behind us to help develop the car and make sure we’re dotting our i’s and crossing our t’s, that’s going to be huge. That was the icing on the cake and made the whole deal really work for us.”

Hargrove climbed the ladder on the open-wheel side of racing after starting in karting. He won the championship in the Cooper Tires USF2000 Championship in 2013, and took that opportunity to compete in the Pro Mazda Championship, where he finished second in the same year that he won his first GT3 Cup title. A couple of partial seasons in Indy Lights followed, but the promise of his open-wheel career wasn’t being fulfilled.

“The right opportunities came my way on the sports car side. I had five years in the Mazda Road to Indy, but I never had much security in that,” he admitted. “When I started racing in Porsche Cup, things started to feel more secure. Once I joined Pfaff, and I knew at the beginning of the year that everything was good for the next year … knowing you’re going to run a second season with the same team is almost unheard of on the open-wheel side.”

World Challenge will give him the opportunity to race at some new tracks, but also some familiar to him, such as Watkins Glen and Canadian Tire Motorsports Park, both tracks at which he won in GT3 Cup this season. But he’s also looking forward to running Long Beach, where he missed opportunities to race in two seasons of Indy Lights.

“The one nice thing is I’ve been to most of these tracks running in the Road to Indy,” he said as he describes what he’s looking forward to in 2018. “On the other hand, I’ve never actually been in an endurance race – not that these are super-long races, but we have the pit stops and driver changes. So that’s going to be new for me. But having someone with a lot of experience like the Porsche factory driver is going to help expedite that.”

He’s also looking forward to Portland International Raceway, the series’ closest stop to his British Columbia home, even if he only had a few laps there many years ago.

“I’ve never had a race close to home,” he says. ‘It’s going to be cool to have a lot of friends and family come out.”

Portland’s July date is the eighth stop on the 2018 calendar. The season begins on the streets of St. Petersburg on March 10-12.