For Porsche driver Nick Tandy, a return to full-time GT Le Mans competition next year in the WeatherTech SportsCar Championship comes at what he feels could be a “golden time” for GTE.

The 2015 overall winner of the Le Mans 24 Hours told RACER that he requested a return to IMSA soon after the fate of the German marque’s LMP1 program was decided earlier this year.

“As soon as I knew the 919 program was going to end, I spoke to Dr. Walliser [Dr. Frank-Steffen Walliser, head of Porsche’s GT program] and Mr. Seidl [Andreas Seidl, head of Porsche’s LMP1 program]
about what Porsche would do in the future,” Tandy explained. “And I expressed an interest to race again in the States. Next year, GTE is going to be Porsche’s biggest racing program, and I’ve always enjoyed racing in North America so I asked to be placed back in the team next year.”

Tandy prefers IMSA’s style of racing and variation in format in contrast to the FIA World Endurance Championship’s six-hour events with the only differences coming at Le Mans and for the ‘Super Season’ at Sebring. In IMSA, Tandy will be able to race in short sprints like the annual trip to Long Beach, and lengthy endurance classics like the Rolex 24 Hours and Sebring 12 Hours.

“I’ve done full seasons in both IMSA and WEC and they’re so different,” he said. “The way the racing is structured is quite different, and honestly I enjoy the variety of races in North America, I enjoy how close they are compared to six-hour WEC races. I enjoy the competition there more and the way that the regulations lead to closer racing.

“I think the variety of race lengths is good – an hour and 40 minutes, 10-hour races, 24-hour races and a few races in the middle. Also, the way that the regulations are with the races, with cautions, full-course yellows and a lot of time that the teams are up against each other in pit stops. For me it’s a more engaging type of endurance racing.

“And the GTLM class, the level of teams and competition is on a par with WEC. Obviously the WEC has two Astons, but in IMSA you have two Corvettes, so from that point of view it doesn’t matter where you’re racing in GTE, because both series are stacked with full-fat factory efforts. I’m hoping that the next few years will be a golden time for GTE racing.”

For the 2018 campaign, Nick Tandy feels confident that Porsche North America will have the strongest drive line-up in IMSA’s ultra-competitive GTLM class. 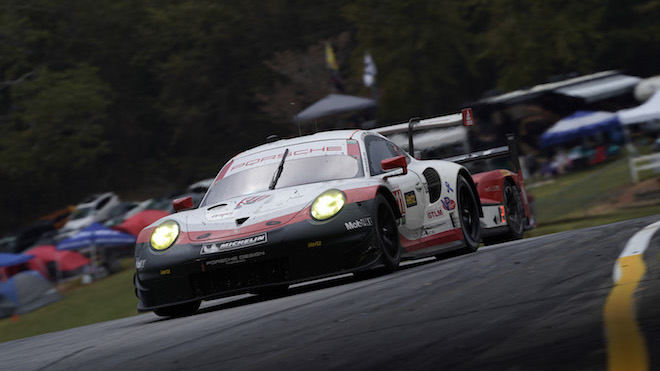 For the full season, he’ll be back racing in the No. 911 Porsche 911 RSR with Patrick Pilet, with Fred Makowiecki joining them for the endurance rounds. The team’s other line-up will see Earl Bamber and Laurens Vanthoor, with Gianmaria Bruni the third driver for the North American Endurance Cup races.

“I drove with [Pilet] for two full seasons in ’15 and ’16, and shared a car for the endurance races in ’14, so I have years of experience with him. We’ve had a lot of success together, we get on really well, and for me, he is one of, if not the best driver I’ve ever seen drive a 911. The fact that we’ve done it before means we will fit back in really easily. It’ll be simple.

“Fred’s also one of the top drivers in endurance racing, he knows the team, he was racing in North America with the team in 2016, so it’s a natural fit. For me there’s no question or doubt that we have the strongest possible line-up in the GTLM class in our cars.”

In addition to IMSA, he’ll also be racing at the Le Mans 24 Hours in the Porsche 911 RSR, as part of the brand’s quartet of GTE Pro-entered factory cars. Le Mans is still extremely important for his program; he said he’d still be making the trip even if he wasn’t racing with Porsche North America in GTE Pro.

“I think if Porsche didn’t take the U.S. cars this year, I’d still be racing at Le Mans in another car of some description,” Tandy revealed. “But it’s great that we can take our full-season IMSA team to Le Mans with the whole team and all the drivers. I think that’s exciting – it’ll be CORE/Porsche North America’s first Le Mans and there’s a real buzz because there’s so many people within the team that have always wanted to go.

“I’m pretty sure that GTE Pro will be the most competitive class on the grid, with new cars from BMW and Aston. On top of what we already have with Corvette, Ferrari and Ford, I can see 2018 being the year that everyone looks back on in years to come.”