How? It’s a question that usually comes attached to many hard-to-explain occurrences.

In this case, the “how” centered on Martin Truex Jr. running roughshod over the Monster Energy NASCAR Cup Series field in 2017. I’ve previously written that what he did throughout the course of 36 races made him a worthy champion, or more specifically, the right champion.

The No. 78 Toyota led the way in every major category. Yet how did Truex accomplish what could be described as a once-in-a-lifetime season?

To start, 2016 was a sign of what was to come. When Furniture Row Racing aligned itself with Joe Gibbs Racing and made the switch to Toyota, there was, as the saying goes, nowhere to go but up. With Toyota horsepower, Gibbs has dominated in recent years and Furniture Row quickly joined the party with the same equipment and information.

Truex won four races in ’16, and had it not been for a blown engine at Talladega in the playoffs, he might have advanced all the way to the championship race. Fast forward to this year, and everything that needed to go right for Truex & Co. did. And then some. 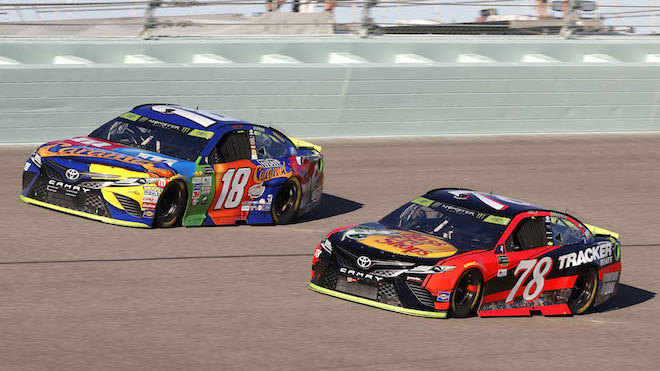 But it couldn’t be ignored that FRR was beating the Gibbs cars in the process, particularly when Kyle Busch admitted at points throughout the year the mounting frustration of not being able to keep up. Truex, said Denny Hamlin, was on another level.

What we saw this year was the result of a good driver, a good team and good equipment all working together seamlessly. There was no magic wand. Or in terms that fans caught up in the new Stars Wars film might understand, Truex, crew chief Cole Pearn and engineer Jeff Curtis are not actually Jedi Masters with a strong connection to the racing gods.

However, their connection with each other is worth noting. Truex recalled one particular event before last month’s title race in Miami. 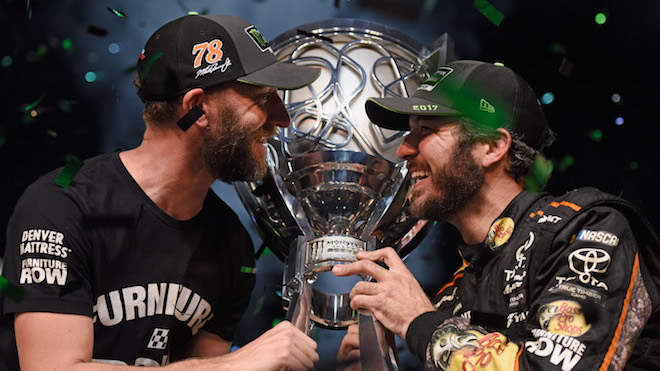 “Towards the end of the [2014] season, I want to say it was Kansas in the fall. We took a different car, different chassis, which was more like the guys that we were buying the chassis from were running, it was one of theirs, and everything felt normal to me again. It’s like, OK, I’m in a racecar again. It has four tires, not three.

“And we went through and ran really well. We were fast all weekend, I think we qualified fourth or fifth, and we ran really good. And then the guys all looked at me like, wow, he might know what he’s talking about. That was it for me. It was like a switch flipped, especially in Cole, because he was the engineer at that time. Then we could kind of see eye to eye and start talking about things, and everything just started making sense to both of us again.

“He’s like, OK, now things are doing what they’re supposed to do. You’re telling me it did that, which I think it’s supposed to do that, where the rest of the year nothing did anything it was supposed to do. Just kind of that switch flipped right there, and we gained that confidence and that trust, and we just started rolling from then on.”

Had Truex not won the championship this year, NASCAR would have faced a litany of complaints – even though the playoff format has been around for 13 years, it is still not widely accepted.

No matter how hard the sport and its broadcast partners try to sell the format and drama associated with it, often it falls on deaf ears. Purists have a hard time accepting a champion being crowned in a winner-take-all race instead of over the course of a full season.

No longer is it about the driver and team who can perform at a high level throughout the year. Now, getting into the postseason is the first goal. Surviving nine weeks to make the Championship 4 is next. “Gimmick” is normally the word thrown around from the anti-playoff fans.

Jimmie Johnson made for a great story a year ago when he captured his record-tying seventh title. Except he was not the best overall driver.

Thankfully for NASCAR, this year’s best driver and team won the championship. In doing so, Truex has momentarily quieted some of the haters.

Plausibly trying to sell someone other than Truex as the Cup Series champion? That’s funnier than Brian France claiming the attendance is up at “many, many events.”

For 2018, NASCAR enters an era that lacks the star power of Dale Earnhardt Jr., Matt Kenseth and Danica Patrick while still reeling from the departures of Jeff Gordon, Tony Stewart and Carl Edwards.

Take a deep breath, because it will be OK.

NASCAR has gone through transitions before. Richard Petty, the Allisons and Dale Earnhardt are just some of the drivers many said the sport could not survive without. Not only has NASCAR forged on, but going into 2018 there are plenty of drivers who are capable of being the face of the sport. 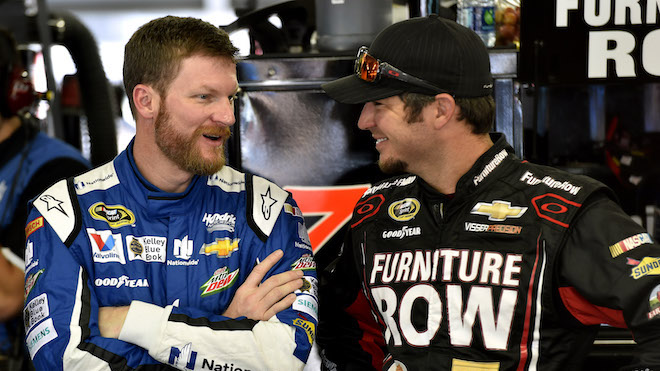 Look no further than Truex. The new champion is down to earth, humble and as proven, can get the job done on track. Plus, Earnhardt fans won’t have to look far for someone who reminds them of their hero. Not only are Truex and Earnhardt good friends, but Earnhardt would vouch for any fan to get behind Truex for many reasons. The two are also very similar when it comes to their passion for hunting, drinking beer and loving family.

NASCAR is in good hands with Truex representing it.

And of the names many like to point to – Chase Elliott, Ryan Blaney, Darrell “Bubba” Wallace – they are stars. These three are not afraid of the spotlight and each one has been able to connect with fans in a unique and genuine way.

The sport is ready to move into a Dale-free future. I just hope the NASCAR marketing department knows how to handle it.