My Mazda Road to Indy: Carlin

My Mazda Road to Indy: Carlin

Among the impressive statistics for open-wheel powerhouse Carlin, one stands out above the rest: The team’s Indy Lights Presented by Cooper Tires squad has graduated an impressive three drivers into the top rung of the Mazda Road to Indy ladder, the Verizon IndyCar Series, over the past three years.

Trevor Carlin’s eponymous team is now set to take that very same step, making the announcement yesterday that it will enter the 2018 Verizon IndyCar Series with Indy Lights graduates Max Chilton and Charlie Kimball. Carlin joins Juncos Racing as MRTI teams capitalizing on their experience and championship success as they take that final step up the open-wheel ladder.

“Being on the Mazda Road to Indy has opened up new horizons for us,” says Carlin. “It’s made us a truly global team. The Mazda Road to Indy doesn’t just apply to drivers; what teams like ours and Juncos are hoping to show is that it applies to teams as well. To be able to roll a couple of cars out onto the grid at the first IndyCar race of the year in St. Pete, as well as onto the Indy Lights grid, is a feather in our cap and for the Mazda Road to Indy. Without them, we wouldn’t be doing this.”

“It’s a bit like an orchestra,” says Carlin, “and I’m the conductor.”

After winning both the team and driver GP3 championships in 2014, Carlin realized he had one major geographical area to conquer, so he tapped GP2 team manager Colin Hale to head up an operation in the United States.

“We’d done everything in single-seaters in Europe apart from Formula One and we wanted a new challenge. Colin set up the GP2 team in 2011 and won the championship in 2014, and he went to the States and did it again, building a team from scratch and winning the championship. Now he has the even bigger challenge of setting up an IndyCar team.

“I’d always been a huge fan of IndyCar and doing Indy Lights was the first step toward doing IndyCar, though this has come together perhaps even more quickly than we expected. But we had a lot of help in the beginning from Chris Dyson; it wouldn’t have happened without him. He helped us get the first car and let us use his workshop in the beginning. We would have liked to stay with him there, but we had enough English staff who craved sunshine so we headed down to Florida.”

Following a conversation at the Abu Dhabi F1 grand prix, Carlin signed 2013 European F3 Open champ Ed Jones, who, says Carlin, “had always wanted to come to America.” The team also brought onboard Formula One refugee Max Chilton to test the car. It was a decision that would change all three of their lives.

“When you need a test driver, you want someone who is unbiased and professional,” Carlin explains. “Max is a very good test driver and he can get the car into a good place. That helped Ed massively, giving him a direction as he was very inexperienced at the time. Between Max and Geoff Fickling, his race engineer, they really brought Ed along and he benefited greatly from their input. But even I was surprised by our start.”

The Carlin team’s “start” in the Indy Lights series announced its arrival in style as Jones posted two pole positions and three victories in the first three races. It obviously ranks as the season highlight, along with Jones’ third-place finish in the driver standings, but for Carlin, the team’s performance in that most American of racing circuits – the oval – stands out equally. 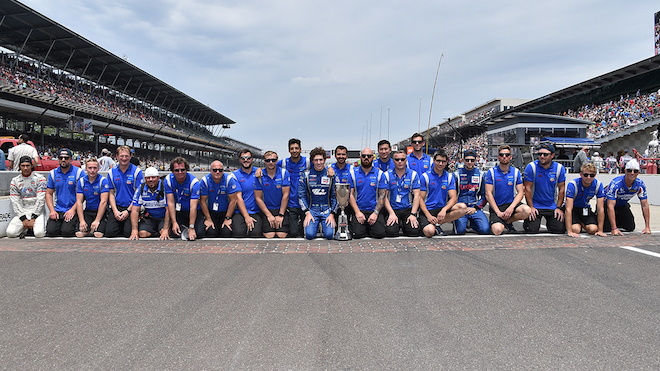 “I have to say, I was a bit surprised. We were just hoping not to embarrass ourselves at the start. It was a bit of a whirlwind, winning on tracks we’ve never been on before, but we did a decent job. It was a highlight of the year to go to St. Pete, being on the pace, being smart and presentable, like we’d been there a long time. I was immensely proud of how everyone carried themselves. We only had three months to get everything sorted but we were ready. We definitely don’t do things by halves.

“But none of us had ever done an oval before, and that’s where Geoff Fickling’s expertise really came into play,” continues Carlin. “He gave us a very good starting point and we took it to a pretty high level. We have won four of the seven ovals we’ve competed on – and one of those losses was pretty close. It’s madness, really, that our strongest discipline in the States has been the ovals!”

Carlin and Jones teamed up again in 2016 and took the championship, albeit in slightly controversial fashion when teammate Felix Serralles moved over on the final lap to give Jones the extra point he needed to put the prize beyond the grasp of his rivals. But with eight podium finishes, eight poles and two victories, the title was no fluke.

“It was a shame that it came down to the way it ended, but it’s a long season and many points were lost and gained by everyone along the way. We deserved it and it was a great thing to close the deal. Ed did a fantastic job and I’m so proud of the job he and the team did, not just in 2016 but over both seasons. To earn the title in only our second year in the series was a real achievement.”

Carlin found another driving gem in 2017, bringing 19-year-old British F3 champ Matheus Leist to the States. Once again, the team nurtured another young talent with a new-found affinity for the ovals, as Leist scored the Freedom 100 victory denied the team the year before (when Dean Stoneman beat Jones by an agonizing 0.0024 second – the closest finish in the history of the Indianapolis Motor Speedway) and followed it up with a dominating victory at Iowa Speedway.

Earlier this month, Leist signed a deal to drive for A.J. Foyt Racing in the Verizon IndyCar Series alongside 1997 Indy Lights champ Tony Kanaan – giving Carlin three graduates from Indy Lights to IndyCar in its first three years. That Chilton and Jones led this year’s Indy 500 – with Jones finishing third – was icing on the cake for Carlin.

“We’re absolutely over the moon for Matheus. The opportunity has come up and he reckons he’s ready and certainly, given his ability and what he did last year, he’s almost there and with a decent amount of testing he’ll be good to go. But it takes people with vision to take a different route to the top of motorsports, to come to the States and to Indy Lights. You see how the opportunities pan out, like Ed getting the Ganassi ride. That’s huge. So the more guys that we can bring up from Indy Lights to IndyCar, the better. That’s why we’re here, it’s part of our job.

“I had flown home after the Freedom 100 and I watched the Indy 500 on the edge of my seat. Max led lap after lap and he looked so comfortable. I was so proud of he and Ed; they’d both come so far. Ed and Max were together in the car in 2015 and two years later they’re in the lead at the Indy 500. It’s quite surreal. It’s amazing what happened.”

The team continues its 2018 season preparations on two fronts – while working on Indy Lights deals, Carlin and Hale focus on putting the pieces in place for their rookie IndyCar season. The Delray Beach, Fla., shop has taken delivery of a new Dallara UAK-18 and the team looks forward to preseason testing.

As Carlin looks back on three years in America and more than 20 years in racing, he is most gratified not just of the drivers the team has produced, but the people. The team prides itself on bringing drivers from the early stages of their career to the pinnacle of racing, a journey he himself can now relate to.

“Some of the kids we’ve had here in the UK started out with us when they were 14 or 15 years old. Like Sebastian Vettel – he was 17 when he drove for us. He’s a lot richer and he’s had a load of success, but when you talk to him it’s like time has stood still. He’s the same guy now that he was then. And Josef Newgarden – when he did GP3 with us he was this bubbly little kid, so popular with the guys, and now he’s champion and he’s still the same. It’s fabulous to see how they grow up and to have known them before they became successful. We’re their surrogate parents while they’re on the road; we’re part of their journey and their education. That’s important to us.”