Hamilton: No desire to match Schumacher

Hamilton: No desire to match Schumacher

Lewis Hamilton insists he is not targeting Michael Schumacher’s record of seven drivers’ championship despite winning three of the last four titles.

Since moving to Mercedes in 2013, Hamilton has enjoyed huge success, winning the drivers’ title in 2014 and 2015 before narrowly missing out to Nico Rosberg last season. A major regulation change threatened to bring that run to an end but Hamilton got the better of a battle with Sebastian Vettel to win his fourth championship this year, leaving only Juan Manuel Fangio – with five – and Schumacher with more.

“It’s taken me 10 years to achieve four,” Hamilton said after being officially crowned world champion at the FIA Prize Giving Gala. “I currently don’t have that desire to match seven, but matching Fangio would be quite cool.

“Given that I’m going to be here for at least another couple of years, that’s my goal. To try and at least get that. We [Hamilton and Mercedes] definitely have more championships to win together.”

While targeting more titles, Hamilton says he wants to retire on a high note in future but won’t stop while he is motivated by the challenge of adding to his tally.

“I want to go out on top, so that’s my goal. Obviously each year, I could do the easy thing like obviously Nico [Rosberg] did, which is just stop and retreat with these four titles, but I think there’s more in me. I think there’s more to come, more of a challenge, as there’s harder times ahead and I like that, I love that – that’s challenging.” 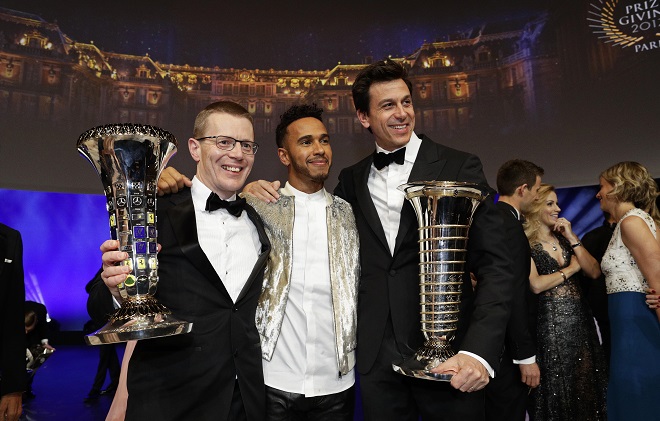 At present Hamilton is out of contract at the end of next season but has stated his desire to stay at Mercedes and team boss Toto Wolff (pictured at right with Hamilton at the Prize-Giving Gala) doesn’t see any major sticking points when it comes to negotiating a new deal.

“I think what we’ve always said is that we want to discuss it once the season has come to a close,” Wolff said. “We’re going to start this discussion now.

“I think it’s pretty obvious that we are the team of choice for Lewis. Lewis is the driver of choice for us. We performed well this year together and I think we would want to continue for a few more years.”