Trevor Carlin’s plans to move his championship-winning junior open-wheel organization up to the Verizon IndyCar Series have been in motion since the team’s formation.

The powerhouse entrant, champions in seemingly every European ladder series, added a North American chapter to its legacy in 2015 when Carlin Racing joined Indy Lights on the Mazda Road to Indy. And with the Lights title won by Ed Jones in 2016, there was only one step left for the British team to make.

“It’s a dream come true, really,” Carlin told RACER. “And it literally was a dream 30 years ago when I first became aware of IndyCar racing and watched it. To be able to say there’s going to be a Carlin entry in IndyCar and the Indy 500 is a dream come true. I’m very thankful to all the people along the way who’ve made it happen. It’s a big moment.”

The list of drivers who’ve moved onward and upward from Carlin Racing is staggering. Formula 1 world champion Sebastian Vettel and his former teammate Daniel Ricciardo are only two of the supreme talents to compete in Carlin’s blue livery along with Indy 500 winner Takuma Sato. And the team’s 2018 IndyCar drivers, Max Chilton and Charlie Kimball, are returning to an outfit that played a major role in their development.

With Carlin’s European ladder firmly established, completing the step from Indy Lights to IndyCar is another major achievement for the Briton. 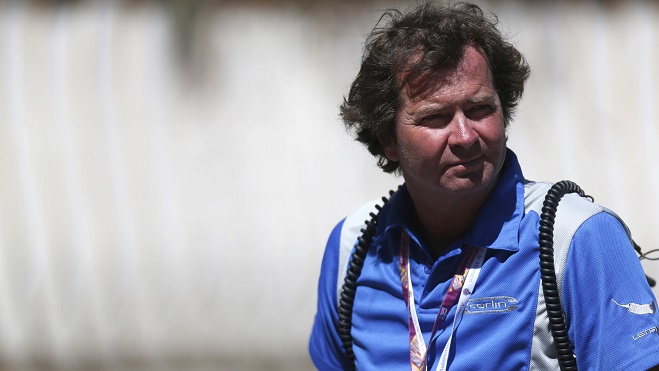 “It’s really nice because our job has been, and still is, to help young drivers work their way through from Formula 4, USF2000, and up through the ladder,” said Carlin (pictured above). “What’s happened up until now, at a certain point, is we’ve had to say goodbye to them because we haven’t been in a category – IndyCar or Formula 1 – where we could hang onto our drivers. And now, we’ve got a chance where we can take a driver from the very beginning all the way to the pinnacle.

“It hasn’t been something that was really achievable in Formula 1 because the barriers for entry are so high. But the way the Verizon IndyCar championship is set up – the financing, the concept of the cars – it just made it achievable for a normal team. Because that’s all we are. Here we are now, about to embark on this great mission.”

As the only IndyCar team based in Florida, Carlin has experienced some of what the A.J. Foyt Racing squad has encountered by running at least one of its cars from Texas. With the IndyCar Series and most of its entrants located in Indiana or neighboring states, established crew members have been reluctant to move. Carlin is confident the team’s approach to fielding Chilton and Kimball will overcome the issue.

“It’s difficult for some people to take up offers with us because they have families and have roots,” he added. “Our target is to build a young energetic team; we’ve got a good mix of guys from the States, a couple of European guys are coming over – not many, actually – and the attraction of at least having some sun in the winter when you’re not racing is good. We’ll have a satellite base in Indianapolis for three or four months of the year when we’re on the road working.”

Along with Harding Racing, Juncos Racing, and Michael Shank Racing, the Carlin team is part of an important wave of new IndyCar entrants headed for the grid in 2018. In his typical fashion, Carlin’s sights are set well above leading the incoming class.

“There’s certainly a buzz about the championship, and I think you’ll actually find there are more drivers looking for seats than there are seats available,” he said. “I think the timing is good: IndyCar has got the business model right, got great supporters and great suppliers, and great events. With the new aero kit, this is the right time for us to move in, and our target is not to be the best of the new teams, it’s to start competing as quickly as possible with the existing teams.”

Listen to audio of Carlin interview below: