Cyril Abiteboul says Carlos Sainz has had a major impact on Renault’s future on top of helping the team secure sixth place in the constructors’ championship.

Sainz was brought in as a replacement for Jolyon Palmer ahead of the United States Grand Prix, with Palmer having scored just eight points in the first 16 races of the season. Sainz duly returned a further six points on his debut for Renault, with Nico Hulkenberg’s sixth place in Abu Dhabi ensuring the team leapfrogged Toro Rosso in the constructors’ standings. 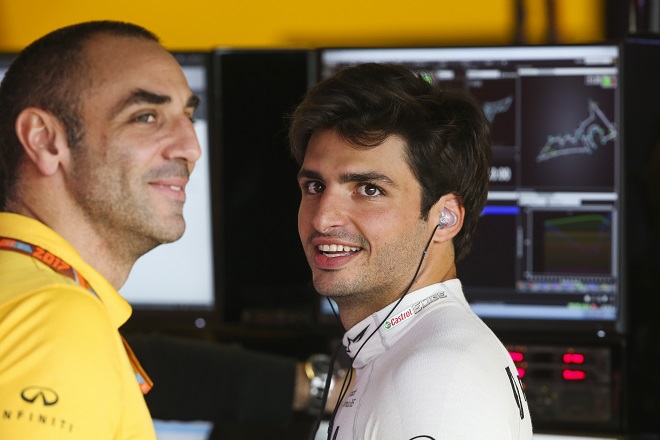 Assessing the impact Sainz has had since joining the team, Renault managing director Abiteboul (pictured, with Sainz) says the Spaniard has also been a valuable addition when it comes to car development for 2018.

“He’s clearly brought lots of energy, he’s brought his motivation, his willingness to continue to progress and to continue to show what he’s capable of outside of the sort of Red Bull environment which is a very good environment but sometimes also a strong environment for a driver to cope with,” Abiteboul said.

“So he’s done that, he’s also scored some points. But also he’s shown some very useful directions for the development for next year, because he’s coming from a different environment. He was capable of bringing some ideas, suggestions.

“He’s got a very good understanding of the mechanics of the car, the fundamentals of the car – and it’s coming at a time when things were not complete for next year, so that’s very useful and we are happy to have made that decision.”

Sainz’s season ended frustratingly as he was forced to retire in Abu Dhabi when a wheel wasn’t properly fitted during his pit stop, and Abiteboul admits the failure is an area of focus for the team during the off-season.

“Pit stops have been one of the two big problems for the team this year, as well as reliability. That’s one of the focuses of the winter. We are changing the organization a bit to really focus on that. The wheel nuts for next year are already designed because we don’t want any of that anymore.”

Sainz is currently contracted to drive for Renault in 2018, with Red Bull retaining control of the 23-year-old. At present only Max Verstappen is under contract beyond next year at Red Bull, with teammate Daniel Ricciardo keen to weigh up his options once the new season gets underway.