Montoya 'having a blast' with new Acura DPi ride

Montoya 'having a blast' with new Acura DPi ride

Juan Pablo Montoya loves his Acura ARX-05 DPi. It’s as serious and simple as that.

In his three decades of professional racing, Montoya has driven just about everything one could dream of. Formula 1 cars with phenomenal power and sound. IndyCars that flirted with 240 mph on big ovals. Stock cars that, well, do whatever they do, and Grand-Am Daytona Prototypes, with their GT-cars-on-steroids charm.

Montoya even tested Porsche’s 1000-plus horsepower 919 Hybrid LMP1 car, which he also loved, but we’ve never heard the two-time Indy 500 winner rave about a car like he has with the ORECA 07 LMP2-based Acura ARX-05. Known for his no-nonsense ways, the Colombian isn’t one to heap praise on something where it doesn’t belong.

It makes the 42-year-old’s unabashed appreciation for the new mount he’ll share with Dane Cameron a rather refreshing thing to hear.

“I’ll be honest, 100 percent, I’ve driven some different ones; some have been a lot of fun, some hasn’t been so much fun. You can ask anybody that was at the first test that the smile on my face when I was getting out of the car was unreal. I loved it,” JPM told RACER.

“You can hustle the hell out of it. The car really rewards driving hard and pushing it. For me, that’s unbelievable. Nowadays, most of the racecars you’ve got to sissy them around and be nice and just drive them on 80 or 90 percent because if you drive them too hard, the tires go. And this Acura, honestly, the more you ask for it, the more will give you. It’s unbelievable.” 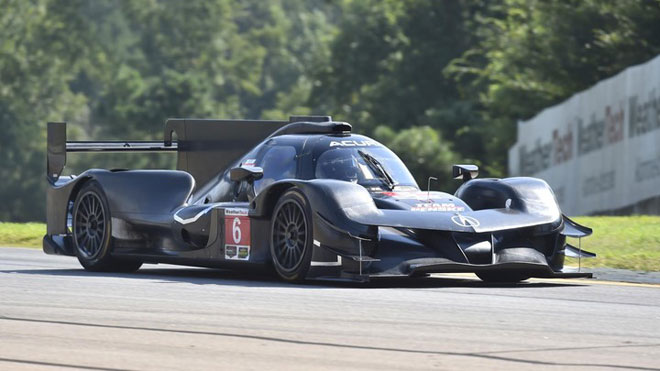 Adding to the purity of Montoya’s love for his new IMSA WeatherTech SportsCar Championship career is the motivation that led to his full-time presence in the No. 6 ARX-05. Known for his miserly ways, all those years of earning in F1, NASCAR and IndyCar made it possible for Montoya to retire after the 2016 Verizon IndyCar Series season when he was replaced at Team Penske by Josef Newgarden.

Without a genuine need to keep going – especially in a sports car series with a smaller profile – the 1999 CART champion could have walked away from the sport. Instead, he chose to continue and, as he reveals, his raw enthusiasm for IMSA’s DPi formula helped Penske IndyCar teammate to find peace in hos own transition from open-wheel to the new Acura program.

“For me, that’s why I do it,” Montoya continued. “If I didn’t like the car, I’d go do something different with my life. But to have the opportunity to be in this project and commit to it and to have the pleasure of driving the car is so good, the performance side of the car is incredible.

“And you push more. It still doesn’t move. When you have a feeling like that, oh. And then you put new tires on and you go for it more. And you’ve still got room. It’s like, how the hell could you not want to drive this car? Helio, his mind was blown, and then he drove it and felt what I was talking about. And he loves it too.”

Shifting from years of racing spec models in IndyCar and NASCAR to helping Acura Team Penske develop the ARX-05 DPi has also rekindled something warm within Montoya.

“It’s so user-friendly and it’s so much fun. The other thing I loved is that it’s back to a real car, where if you need to develop something, you can,” he said. “We can develop the traction control and the braking and this and that and you can make it downshift the way you want to. You can change everything the way you want it and that’s just a pleasure. That’s pretty exciting, to be honest. I’m having a blast right now, for real.”