The 2018 Pirelli World Challenge schedule that was announced today has a few surprises. Notably, it includes two new stand-alone races at Portland International Raceway and Watkins Glen, and the elimination of races with the Verizon IndyCar Series at Mid-Ohio and Sonoma. It’s also a more compact schedule, with the full series beginning once more at Circuit of The Americas in March and concluding on Labor Day at The Glen. The shortened season is a big departure, with one or all classes having gone into October for the last several years.

“I would like to create a real, measurable distance between the last race of the year and [the SRO Intercontinental GT California 8 Hour at] Laguna Seca,” WC Vision President and CEO Greg Gill explained. “We’ve had this break in our schedule [at the end of the year] every two weeks, every two weeks. I would like to give more space. Early in the year, one of the GT teams commented to me that they hate how early we start and how late we go. This is customer-based racing and I think less is more.” 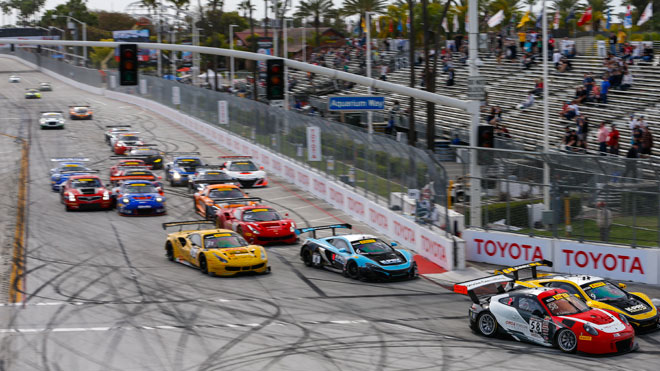 World Challenge will now have seven stand-alone events and three – St. Petersburg, Long Beach (pictured above) and Road America – with IndyCar. That’s a big shift from the past few years where it’s been closer to a 50-50 split.

“We have seen the success as a headliner event, and we’re bringing more opportunity to headline like we will at Portland and like we will at Watkins Glen,” Gill said. “I don’t want to say that’s the future for the series. As long as I am breathing, we will never stop going to Long Beach; there are certain things that are iconic and are necessary. I would always hope that we will have a partnership with IndyCar. They are the people who have helped us get on the map. I want to honor that and give our teams that experience for the future.”

Each of the two IndyCar weekends that World Challenge dropped faced issues. Mid-Ohio was the same weekend as the 24 Hours of Spa, which is put on by World Challenge partner and stakeholder SRO. Sonoma Raceway has limited paddock space, and the World Challenge teams were parked off of Turn 7 at the other end of the track. So instead PWC will go to Portland on the Rose Cup weekend and end its season at Watkins Glen on the Labor Day weekend that IndyCar held for a single year.

The series visited Portland three times from 2001-’05. The track had long been a staple for professional racing, but hasn’t hosted a top-flight professional series in years. This year it brings back two – World Challenge and  IndyCar, which will race there on Labor Day. The Rose Cup weekend has been populated by amateur racing for many years, particularly Oregon Region SCCA, and that is expected to continue in some way on the bill with World Challenge.

“We had started a dialogue almost three years ago,” Gill said. “In my mind, that facility and the passion in the Pacific Northwest for motorsports, from Seattle, Vancouver, Portland … you know it’s there, and yet they are not hotbeds of motorsport. What can you do to address a pent-up demand? Now we are doing it back-to-back. I spoke with the promoter of the IndyCar race and told him how excited I was for them, and hopefully we will keep the seats warm for them.”

With IndyCar passing over the Glen on Labor Day weekend – which was originally a late substitution for the ill-fated Boston street race – that opened up another opportunity for World Challenge. The series has raced at the historic track in the Finger Lakes region of New York eight times, most recently in 2010, and Gill says he’s excited for the series to return.

“Everybody loves the Glen,” he said with a smile. “It’s as simple as that. People don’t come to me and say ‘I’d like to go to Fontana.’ They do say ‘I want to go to Watkins Glen.’ The opportunity came up when IndyCar said they were going, and we thought it would be a good opportunity to start a dialogue and see where it goes.”

The 2018 Pirelli World Challenge season will officially begin at the Grand Prix of St. Petersburg on March 9-11, where GT, GTS and GT4 will join IndyCar for their season opener. Then the season begins in earnest for all three classes at Circuit of The Americas in late March before going to Long Beach, VIR, Canadian Tire Motorsports Park, Lime Rock, Portland, Utah and Watkins Glen. The SRO California 8 Hour will be Oct. 19-21 at Mazda Raceway Laguna Seca.