Justin Allgaier likely will be without crew chief Jason Burdett as he races for the NASCAR Xfinity Series championship this weekend.

Anticipating a potential appeal from JR Motorsports, an expedited penalty report was announced by NASCAR on Monday morning after the No. 7 Chevrolet failed post-race inspection at Phoenix Raceway. The violation was a brake cooling hose being unattached.

Under section 20.15.2.2 Rear Brake Cooling of the NASCAR Rule Book, the rear brake cooling assemblies must be sealed from air inlet to exhaust.

JRM has been issued an L1-level penalty.

Burdett (pictured at left with Allgaier) has been suspended from the next Xfinity Series race and fined $10,000 while Allgaier’s 10th-place finish has been ruled encumbered. The team has also been docked 10 driver and owner points.

The penalty does not affect Allgaier’s standing in the Championship 4. 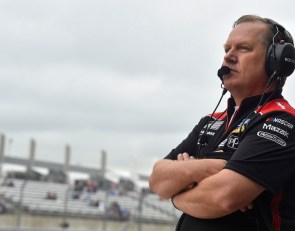