While there’s been much speculation regarding the overall health of the FIA World Endurance Championship following high-profile exit announcements from Audi in 2016 and Porsche this year, momentum has been building in the background.

Whatever might be going on in LMP1, GTE interest is so healthy that the ACO and FIA may have to turn entries away for the “Super Season.”

VIDEO: The Mazda 787 with a secret past

In the Pro class, the entry is set to be 10 cars strong for the full season, with factory efforts from AF Corse/Ferrari, Aston Martin Racing, Chip Ganassi Ford, Porsche GT Team and the new BMW Motorsport M8 program with MTEK.

And its strength is not only in its numbers, but also the age of machinery. BMW’s new M8 has been out testing extensively (pictured below), and will campaign in both the WEC and IMSA (the latter with Team RLL). Aston Martin Racing, meanwhile, brings its new Mercedes-powered Vantage to the ranks. The car is scheduled to be launched later this month in London, in the midst of what RACER understands is the most intensive testing program a Prodrive GT effort has ever been through, including a run at Motorland Aragon, and its first-ever 30-hour test at Sebring. 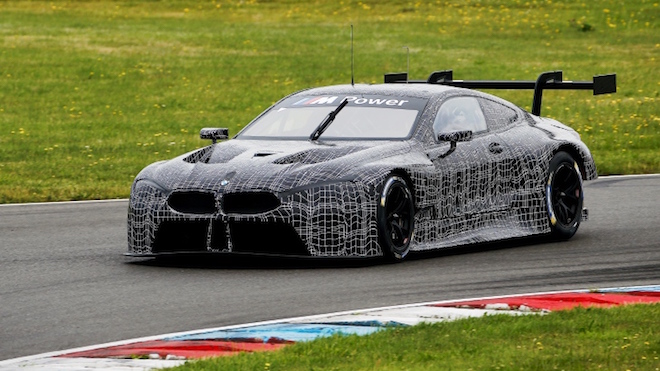 The only unknowns relate to potential third cars for the GTE Pro teams, either for a partial campaign, or for Le Mans only. Both Porsche and Aston Martin are rumored to be evaluating an additional car.

Porsche sources explained to RACER that a third Le Mans 911 hasn’t been signed off, but if it does push the button, it “would be down to the ACO.” Aston Martin was understood to be looking at a third car for a shortened campaign, however that is now believed to be an increasingly unlikely prospect.

Nevertheless, with new cars and new drivers joining the fray, and a thrilling 2017 title fight to use as a launch pad, the 2018/19 is set to be a season for the ages.

GTE Am is also preparing for an uptick in entry numbers. RACER understands that the ACO and FIA selection committee is set to receive entries that could reach double figures. However, with the series’ entry capped at 34 (due to garage restrictions), there may have to be some efforts turned away, in order to keep a healthy balance between prototype and GT numbers.

In the Porsche camp, there’s a chance of as many as five entries, all potentially featuring the new-for-2017 911 RSR – a car that is proving to be a valuable bargaining chip in customer negotiations.

Proton Competition is planning to race a pair in the WEC (with another pair in the ELMS); team boss Christian Reid telling RACER that one is confirmed, with another in negotiation. The fourth Proton entry is believed to be the car that was initially destined for an un-named Asian customer planning a WEC effort, though that program has not come to fruition.

Gulf Racing, too, is keen to double up next season and run two 911 RSRs, though it is unclear whether a second car will be possible.

The final prospect for the Stuttgart-brand, RACER believes, is a WEC newcomer from the Porsche Supercup paddock: Team Project 1/Tolimit, which is looking to run a single car.

For all five to reach the grid, the WEC would have to allow Porsche to have strength in numbers in the Am class, something that isn’t guaranteed. Porsche would also have to commit to building a seventh customer 911 RSR, one more than its original commitment.

RACER spoke to Dr. Frank Walliser – head of Porsche’s GT program – at Shanghai, who confirmed that the seventh car is real, though its chances of hitting the track depends on the finalization of certain deals. Notably, Walliser was also confident that the ACO won’t – and indeed, shouldn’t – be turning GTE entries away.

Meanwhile, Aston Martin’s presence in the class also has the potential for a boost from a single Vantage to three. Paul Dalla Lana’s long-time AMR-entered Vantage may return for next season; Dalla Lana confirming to RACER in Shanghai that he was actively looking at the details for a program despite not being able to run the new 2018 Vantage.

ELMS/British GT regular TF Sport has also indicated that it is set to file an entry for the “Super Season” with a single Vantage.

2016 ELMS champion Beechdean AMR is known to be making moves to try to field a Vantage in the world championship too, as part of team boss Andrew Howard’s drive to run “multiple cars in multiple series” next year.

The question is whether or not the teams will race with the older Vantage for the entire 2018/19 season. The Super Season’s 18-month calendar introduces the possibility of switching to the new 2018 Vantage after the Asian leg at the end of 2018; the car by then being a year old (and therefore GTE Am eligible) in time for Sebring 2019.

Aston Martin campaigned unsuccessfully to get a waiver that would have made the car eligible for the Am class for the full Super Season. It’s believed that GTE Am teams will utilize the current car through the full 2018/19 season.

At Ferrari, Clearwater has expressed a desire to stay in the WEC, however team owner Weng Sun Mok – while keen to continue – has yet to make a firm decision since AF Corse presented the team with the full package deal for 2018/19. A final decision is expected prior to the season finale at Bahrain next week.

AF Corse-run Swiss-flagged outfit Spirit of Race is also making moves to return with a pair of 488 GTEs, one almost certainly featuring Thomas Flohr, back for a second season. However Amato Ferrari told RACER that he hopes to make a firm announcement in Bahrain too. Notably, AF Corse will run at the post-season Bahrain Rookie Test this year with Japanese gentlemen driver Ishikawa Motoaki, who previously raced with the team in GT3 in the Blancpain GT series. That raises the potential for Motoaki to be involved with a currently unidentified additional GTE Am effort expected from the AF Corse/Spirit of Race camp.

Of the two American GTE chassis in the field, RACER believes that there is active interest in the Ford GT from two customer teams, though there’s no confirmation about what a customer program for the GT would look like – or if it will even happen.

On the other hand, there is a real chance of Corvette being represented in Am. After scaling back to just two races in 2016 (ELMS at Monza and Le Mans), French team Larbre is understood to be trying to forge a comeback to the WEC for 2018/19, giving the C7.R a last hurrah in the series before the GM brand releases its new product.

If the stars align, the grid could therefore peak at over 10 cars in Am, with a further 10 in Pro. If that happens, then the FIA WEC selection committee will have its hands full before the formal announcement. All things considered, that’s a good problem to have.