Esteban Ocon is keen to follow the example of Sergio Perez when he races alongside the Mexican for Force India in 2017.

Perez joined Force India from McLaren at the end of the 2013 season, having struggled somewhat at Woking in what was only his third season in Formula 1 at the time. The move to join Nico Hulkenberg at Vijay Mallya’s team was the start of a recovery for Perez, who has gone on to improve with every passing season.

Having finished 10th in the drivers’ championship in 2014 with 59 points, Perez finished ninth a year later and was seventh in 2016, breaking the 100-point barrier for the first time in his career. Ocon replaces Hulkenberg this season and says the progress he has seen in Perez convinces him Force India is the right place for his development.

“Yeah it’s fantastic, really good,” Ocon told RACER of the move to Force India. “They have made drivers improve a lot. Sergio has grown massively in the period that he has been with the team and I hope they can do the same with me. 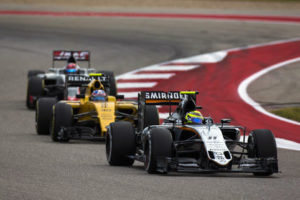 Ocon joined Force India due to Hulkenberg’s decision to move to Renault late last season. The Frenchman was the reserve driver at Renault at the start of 2016 and admits he thought Enstone was his most likely destination for this coming year until he got the call from Force India in November.

“I don’t know, really,” Ocon replied when asked how close he was to joining Renault. “I think Force India wanted me, Renault probably decided on another thing. For sure there were talks and there was an opportunity also there but in the end I’m happy to go with Force India.”

Ocon denies it is easier for his career path to race for a Mercedes-powered team than if the Mercedes youngster had joined Renault.

“No, because my career is managed by Mercedes, so wherever I race I will always be a Mercedes driver. Wherever I race I want to do good. Toto [Wolff] is not going to call if I raced for Renault and tell me to brake!”