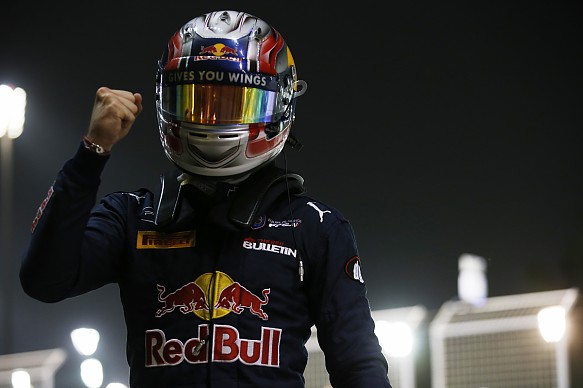 Gasly waited in the pitlane while everyone completed their first runs before taking his Prema Racing car onto the circuit during the mid-session lull, and decimating provisional polesitter Sergey Sirotkin’s time by a staggering 0.988 seconds.

Times looked set to tumble on the second runs, and Sirotkin was up on Gasly’s best after the first two sectors, but the ART Grand Prix driver fell 0.328s short. A yellow flag appeared during the final portion of Sirotkin’s lap, and the consequent momentary disabling of DRS may have made the difference.

Giovinazzi was second to Sirotkin after the first runs before Gasly’s extraordinary effort, and the Prema-run Italian star looked on for a good lap on the second runs. But he lost time when he got stuck behind Luca Ghiotto, and the lap was good enough only for sixth.

Giovinazzi went for another attack but, with his super-soft Pirellis fading fast, he fell just 0.001s short of his earlier effort. Meanwhile, Gasly’s attempt to put his pole further beyond reach ended with a spectacular lock-up at Turn 8, but his earlier effort was good enough to claim the four points for pole position.

Up to third at the end on his second lap on the tires was Artem Markelov, the Russian Time driver famed for his soft touch on his rubber.

ART’s Honda protege Nobuharu Matsushita spent all day in the mix toward the front and he will share the second row with Markelov. Fifth fastest, ahead of Giovinazzi, was MP Motorsport’s Oliver Rowland after a strong second run.

Seventh was Norman Nato (Racing Engineering), with Raffaele Marciello, who still has a distant mathematical shot at the title, eighth in his Russian Time car. Completing the top 10 were Alex Lynn for DAMS and Mitch Evans for Campos Racing.

Best of the two end-of-season GP2 debutants was Louis Deletraz in 20th with Carlin, with Emil Bernstorff bringing up the rear of the 22-car field in his Arden car.