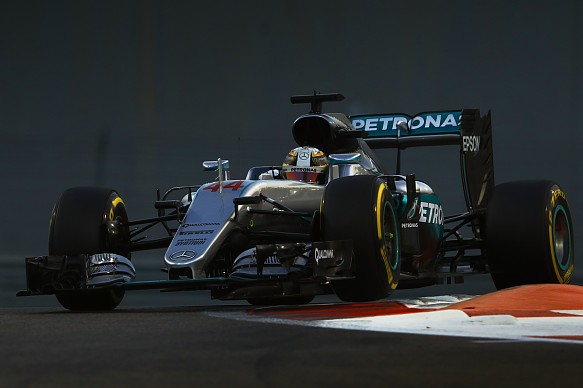 After failing to complete a proper fast lap on his first set of soft-compound tires and complaining about flatspots, Mercedes driver Hamilton deposed teammate and title rival Nico Rosberg from first place with 50 minutes remaining by 0.079 seconds, with both using ultra-soft Pirellis.

This came shortly after Rosberg had knocked Ferrari driver Sebastian Vettel, who was the first to go fastest using the ultra-softs having bettered teammate Kimi Raikkonen’s super-soft time, off top spot. Vettel later suffered a gearbox failure with 10 minutes remaining and stopped on track.

Max Verstappen and Daniel Ricciardo were fourth and fifth and separated by just one thousandth of a second, the latter improving on his second quick lap on the ultra-softs.

Verstappen later complained he was losing power coming off corners and that it was “like a handbrake” on corner entry, with Ricciardo earlier suffering his own brief loss of power at Turn 1.

Valtteri Bottas, who was briefly fastest early in the session on super-softs and came close to reclaiming the spot after dropping behind both Ferraris, ended up seventh ahead of Force India duo Sergio Perez and Nico Hulkenberg. Felipe Massa rounded out the top 10 during the final Friday of his F1 career.

Fernando Alonso was 11th fastest, with McLaren teammate Jenson Button slotting into 12th in the second half of the session – albeit 0.457s slower – after having a brief off-track moment at Turn 8 earlier on.

Romain Grosjean was 13th fastest, although his session was interrupted by a water pressure problem that led to the Haas team calling him to return to the pits after 17 laps.

The two Manor drivers has a solid session, with Esteban Ocon and Pascal Wehrlein in 16th and 17th and separated by 0.154s, putting them ahead of the Saubers of Felipe Nasr and Marcus Ericsson and Kevin Magnussen’s Renault.

Toro Rosso duo Carlos Sainz Jr. and Daniil Kvyat completed only nine laps between them and sat out much of the 90-minute session. This followed Daniil Kvyat suffered his second left-rear puncture of the day, having suffered a similar fate in practice one, and spinning at Turn 17.