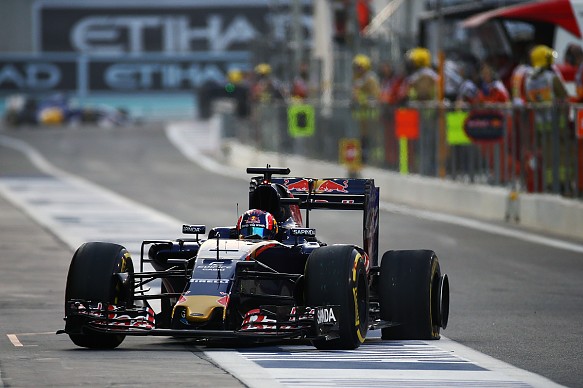 Carlos Sainz Jr. says Toro Rosso and the FIA took a joint decision for the team to stop running in second practice for the Abu Dhabi Grand Prix on safety grounds.

Daniil Kvyat stopped on track with a left-rear puncture in FP1 and then spun at Turn 17 in the second session when his left-rear tire deflated again. On returning to the pits, the team and F1 technical delegate Jo Bauer inspected the Russian’s wheel.

While investigations were carried out, Sainz was called back to the pits with neither car returning to the track for the remainder of the session.

All this comes after Sainz suffered two punctures during the final practice session at the U.S. Grand Prix, first on the right rear and then on the left rear.

“On my car, they didn’t find any issues, but it was the same in Austin, that I had two issues,” said Sainz. “This is the first time the team and the FIA took the decision to not let me run because of safety concerns.

“It is something I cannot criticize – I cannot regret as you are putting a lot of danger into the situation.”

Sainz admitted Toro Rosso “really doesn’t know” what is causing the failures and said he will not be confident until the team tells him the problem has been understood.

“At the moment, the team is trying to find a solution, to clear all the parts that can be touching,” he said. “This is what we tried from FP1 to FP2 but it hasn’t worked on Daniil’s car at least.

“Until we solve it and until it doesn’t happen again, I cannot be 100% confident. To solve the problem, first you have to find the cause, but we haven’t yet.”

Kvyat added: We’ve just got to dig really deep and it’ll be solved, I’m pretty sure. The team knows about it and from my side, all I can do is go out and drive.”

Pirelli racing manager Mario Isola said the problem is “not related to the tire.”

He added: “It’s the team that will analyze the information on that but the tires were OK, both.”