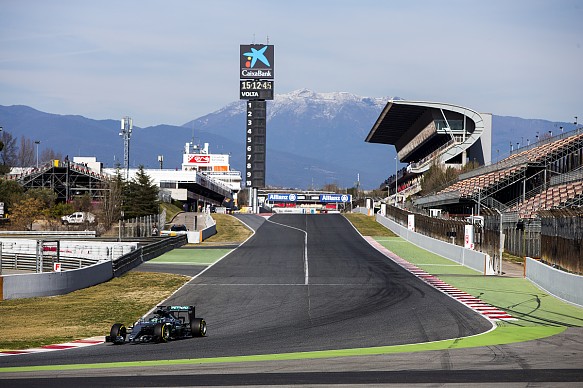 The furor surrounding 2017 Formula 1 pre-season testing has finally been resolved, with both sessions to take place at Barcelona as planned.

A debate has raged in recent weeks, with tire supplier Pirelli wanting at least one of the tests to take place in Bahrain to assess its new-for-2017 wider tires in warm conditions. Pirelli was supported by Mercedes and Ferrari but found opposition from Red Bull and Williams, citing cost and logistics as reasons for staying at the Catalunya circuit.

It was suggested the financial difference between a test in Spain and one in Bahrain was nearly $500,000, while it would also pose problems in terms of shipping out parts given the additional time required.

Following a meeting between the teams, FIA F1 race director Charlie Whiting and F1 chief executive Bernie Ecclestone in the COTA paddock, it has now been decided both tests – that will run Feb. 27-March 2 and March 7-10 – will be at Barcelona.

It is almost certain the in-season test currently scheduled for after the Spanish Grand Prix at Barcelona in May will now be switched to after the race in Bahrain, as suggested by Red Bull team principal Christian Horner. That will give Pirelli the two days of hot-weather running it desperately craves in order to ensure its compounds for the remainder of the season will be in the right window.

Although that test would be three races into the calendar, as Horner suggested the temperatures generally expected across the trio of Australia, China and Bahrain would not be extreme, with the latter being a twilight race.

For cost reasons it also makes sense with the teams already stationed in Bahrain for the race weekend, leaving the test to take place on the Tuesday and Wednesday post-race, April 18 and 19.

Trans Am 7m ago