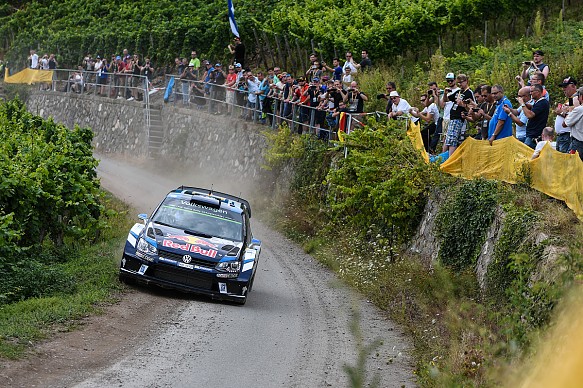 Sebastien Ogier increased his Rally Germany lead on Saturday afternoon as he bids for his first victory in the World Rally Championship since February.

The three-time champion grabbed the rally lead on Saturday morning, and though Volkswagen teammate Andreas Mikkelsen retaliated, Ogier ended the first loop – which was disrupted by a crash that injured Stephane Lefebvre and co-driver Gabin Moreau – ahead by 13.2 seconds.

The Frenchman then added to that advantage on SS11, the repeat run of Freisen-Westrich, and after two conservative stages stretched his legs in his Polo R with the fastest time on the day-ending second run of Panzerplatte. He therefore enters the final day with a lead of 33.4s over teammate Mikkelsen, who hung on to second despite an alternative tire choice failing to pay dividends.

Mikkelsen opted to take four hard tires and two softs onto the final two stages, but lost time on the full Panzerplatte run to his fully soft-shod rivals who fared well through the damp forest sections. But the Norwegian had enough in hand to end the day second, running 13.1s slower than his pace-setting teammate to carry a 3.4s advantage over the leading Hyundai of Dani Sordo into the final day.

Sordo caught up with Mikkelsen and Hyundai teammate Thierry Neuville in the afternoon, and usurped Neuville as the best-placed i20 driver with the second-fastest time on Panzerplatte – albeit with a mere 0.4s in hand over his teammate heading into the final day.

Behind Neuville, Ott Tanak had enjoyed a consistent rally and held a comfortable fifth before retiring with a suspected alternator failure at the end of SS11. Hayden Paddon instead occupies that position, having recovered from a torrid first day that he ended in a distant eighth.

Paddon found enough pace on Saturday to overhaul M-Sport’s Mads Ostberg on the overall leaderboard, before Tanak’s retirement promoted him into the top five.

Ostberg remains in touch in sixth, half a minute behind the Hyundai driver, and last of the remaining WRC cars not running under Rally2.