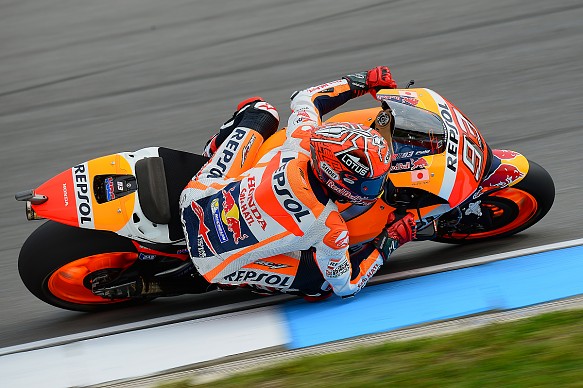 MotoGP championship leader Marc Marquez turned in a stunning late lap to claim his fifth pole position of the season in qualifying for the Czech Grand Prix.

Yamaha’s Jorge Lorenzo was considered the man to beat after leading the way in third practice by three-quarters of a second, and he laid down an early marker in qualifying.

Lorenzo’s first flying lap was a 1m54.959s, 0.667 seconds clear of the pack. Marquez then improved to slash that deficit to 0.331s on his Honda, before Lorenzo improved again in the 15-minute shootout, restoring a tenth back to his advantage.

But in the final minute, Marquez completed a scintillating lap that included a pass on Valentino Rossi at the final corner, and crossing the start-finish line right behind Pol Espargaro’s Tech3 Yamaha. He managed to avoid losing any time with the maneuver, and his 1m54.596s was the fastest ever MotoGP lap of Brno.

The checkered flag flew moments later, and Lorenzo had already backed off, having to settle for second on the grid by 0.253s.

Andrea Iannone snatched the final place on the front row of the grid for Ducati after the flag was shown, but 0.631s split the top three.

Iannone’s late lap denied Suzuki’s Aleix Espargaro a first front-row start of the year, demoting him to fourth where he will share the second row with Hector Barbera and Rossi.

Andrea Dovizioso was delayed by an apparent tyre issue in the first half of the session and he eventually set the seventh-fastest time, just ahead of Suzuki’s Maverick Vinales, who had to abandon his second run with a suspected brake issue.

Dani Pedrosa safely navigated the first phase of qualifying, finishing on top with a 1m55.793s, and he took ninth on the grid.

The other rider to advance from the first phase of qualifying was Bradley Smith, who wound up 11th and one spot ahead of his team-mate Pol Espargaro.

Danilo Petrucci qualified 13th but will drop to 16th, based on his three-place grid penalty for contact with Eugene Laverty on the final lap of last Sunday’s Austrian GP.