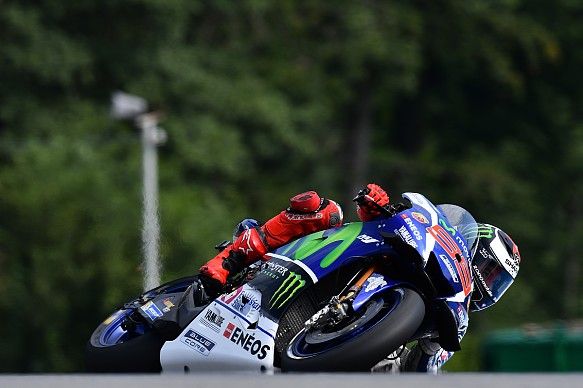 Lorenzo was third-fastest in second practice, but was one of the last riders to improve on his Friday-afternoon benchmark. When he did opt for fresh tires on his final run in FP3, Lorenzo turned in a 1m54.791s with two minutes remaining, the fastest-ever MotoGP lap of Brno and the first time any rider had dipped beneath the 1m55s barrier this weekend.

The reigning world champion threatened to go even faster on his next lap, quicker again through the first two sectors, before finding traffic.

Lorenzo’s advantage as the checkered flag flew was 0.771 seconds and even though Andrea Iannone then improved to a 1m55.535s, Lorenzo’s final buffer was still 0.744s.

Austrian Grand Prix winner Iannone crashed at Turn 13 when he lost the front end of his Ducati over a bump 10 minutes into the session, but was able to remount his bike and get pushed back to his garage.

Friday pacesetter Marc Marquez was another rider to wait until the very end to improve, winding up in third place on his Honda, ahead of Maverick Vinales.

In a bid to reverse its trend of fading in the second half of races, Suzuki did not run new tires on Vinales’ bike on Friday afternoon, instead focusing on long runs. He was the first to really switch his focus in third practice, moving to the top with a time of 1m55.739s with 13 minutes remaining, then improving the next time around to a 1m55.604s.

Valentino Rossi was the first rider to improve in the session, but wound up fifth, his 1m55.708s putting him 0.917s behind his Yamaha team-mate Lorenzo.

Aleix Espargaro was sixth, ahead of Andrea Dovizioso, while Hector Barbera only set the 18th-fastest time but his Friday lap was good enough to stay eighth in the combined order and book a place in Q2.

Pramac Ducati’s Redding moved into 10th in the closing seconds, but was bumped back down to 11th almost immediately by Pol Espargaro’s lap, as his bike slowed a mechanical problem at Turn 1.

Dani Pedrosa and Bradley Smith – who also did not improve in the session – wound up 12th and 13th and will join Redding in the first phase of qualifying.

Pedrosa appeared to get caught up with Barbera in the closing moments, Barbera the aggressor including a pass at the penultimate corner only to pit immediately.