Defending Sprint Cup champion Kyle Busch won his second consecutive Brickyard 400 on Sunday at the Indianapolis Motor Speedway, but he wasn’t the most notable story of the afternoon.

Nor was he the second.

That status belonged to Jeff Gordon and Tony Stewart, presumptively making their final NASCAR Sprint Cup starts at the track that launched both of their respective careers. Neither legend factored into the finish, but both stole postrace festivities from Busch in every way possible.

After taking the checkered flag, both drivers lined up on the frontstretch and took a celebratory victory lap around the 2.5-mile oval to say goodbye to the fans who arguably adored them more than any other. Stewart finished 11th and Gordon 13th, but both drivers agreed that they wanted to take one more lap.

It was Stewart’s idea.

“It was cool,” Stewart said of the lap. “I knew when we got the checkered we just didn’t want to come in just yet. I wanted to run one more lap and Jeff was around us and before that last green run I told my spotter to go get his spotter and said after this thing is over, we need to go a lap around here together because most likely is the last time we’ll both get a chance to do that.

“I couldn’t think of a better guy to share that moment with than Jeff.” 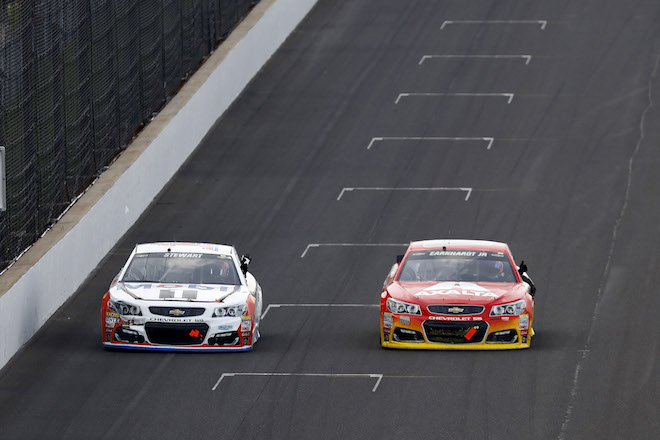 Gordon thought he had run his final Brickyard 400 last July, but it didn’t end the way anyone wanted: a crash and 42nd-place finish. The four-time champion was called out of retirement earlier this week to replace the concussed Dale Earnhardt Jr., and he felt relieved to finish this race on a much more positive note.

It meant even more that he could finish it with Stewart.

“Well, Tony and I have gone through a lot over the years,” Gordon said, “But he and I have become really good friends. I was with him when he got hurt earlier this year. And to see what he’s done and how tough he is as a competitor – I’ve always known what a great guy and what a great racecar driver he is – but now I know more about who Tony Stewart the man really is.

“I’m just so proud that I was able to be here and race with him in his final [Brickyard] race.”

Gordon brought the prerace drivers meeting to a slight delay on Sunday morning, taking the stage and asking his fellow drivers to recognize and applause Stewart for his contributions to the sport. It was moments like that and after the race that Gordon says will ultimately stick with him.

But with that said, Gordon was especially pleased to finish 13th with a car that qualified 21st, with a driver that hadn’t competed since November.

“I enjoyed the moments,” Gordon said. “But when we were up in 12th and [crew chief Greg Ives] made an excellent call to come in a little early, we made that car much better. I was having fun at that point. This is a challenging, challenging racetrack. It’s really hard to get all four corners right. So there were moments of fun all day. I didn’t want to see those restarts. I’m horrible on restarts, so those didn’t help us any, but I got a few back on that last one.”

Stewart started second and spent much of the first half inside the top 10, but was hit with a speeding penalty on lap 121. This caused him to lose a lap, which put him back in the field and led to picking up damage in a multi-car crash with seven laps to go.

Despite the adversity and relative disappointment, Stewart said this was the most relaxing Brickyard 400 he has ever taken part in.

“This has been the most relaxing Brickyard I’ve ever had and the most fun I’ve had at a Brickyard,” Stewart said. “It was fun to win this race twice, but it was stressful to do it. For some reason this weekend, Drew Brown and Eddie Jarvis and everybody with us just made my schedule as open as they could to let me enjoy it, and we did.

“We had a lot of fun this weekend from start to finish.”