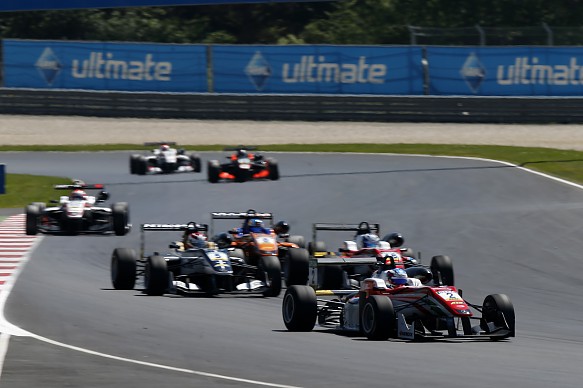 The FIA and teams in the Formula 3 European Championship are weighing up a World Cup for the category in 2017.

The World Cup, which would run over three events, would accompany a European championship scaled down from the current 10 rounds to eight in a bid to cut costs, with the FIA considering a European championship budget cap of €500,000 [$554,000]. Realistic budgets for a seat with a top team can currently be around the $775,000 region.

The World Cup could allow those who can afford it to contest extra races without disadvantaging those who do not have the ability to raise funds beyond a European campaign, although it has not yet been decided whether it would be three-standalone events or whether it would combine with the European events for an 11-round series.

Although reports suggest that the World Cup races could take place in Bahrain and Abu Dhabi, along with a Mexican Grand Prix support round, sources suggest it is too early to pinpoint venues.

With the Mexican GP taking place in October, this would pose serious logistical problems in air-freighting cars and equipment to November’s Macau Grand Prix – this is usually done from Luxembourg immediately after the European season finishes.

Carlin boss Trevor Carlin said of the World Cup plan: “It sounds like a good idea, but it’s hard to know what format it would take. It would mean the European championship is a bit cheaper, which is a good thing, and the people who can’t afford to do the add-on races wouldn’t have to do them.

When asked whether World Cup races should be after the European season, in order not to give a disadvantage on track time to those who could not afford the extra events, Carlin added: “The Middle East races you’d do in January or February, but that doesn’t help people who can’t afford it.

“It would make sense to include Macau – you’d still want to go for the win there instead of finishing third to collect points to win the World Cup.”

Prema Powerteam’s Rene Rosin said: “What we are discussing between the teams, the FIA and the promoter is a very good step forward. It could be something different but it depends on the conditions.”

Meanwhile, the F3 European Championship is almost certain to return to Silverstone in 2017. The 2016 series does not visit the UK after an impasse over the cost of appearing on the World Endurance Championship’s Silverstone support program, but this is believed to be close to resolution for next year.