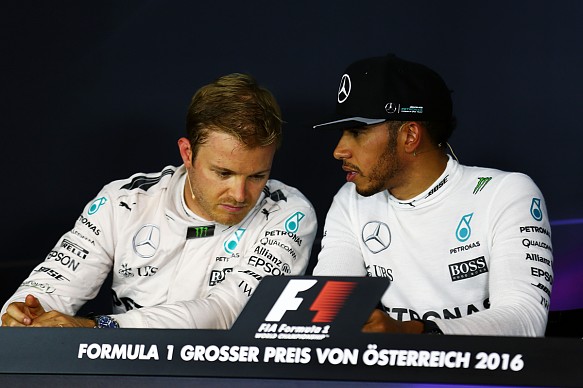 Wolff is seriously considering such an option in the wake of his errant drivers colliding for the second time in five grands prix, with a decision due this week ahead of Silverstone.

Rosberg was blamed by the stewards for the Red Bull Ring clash, which happened as Hamilton passed him for the race lead around the outside on the final lap.

Asked whether his heart would sink if they were introduced, he replied: “I wouldn’t say my heart sinks. It takes a lot to get my heart to sink, but yeah, I want to race. I grew up wanting to race, racing the best, and being the best, by outdriving another individual.”

Referring to Ferrari’s imposition of team orders when Michael Schumacher and Rubens Barrichello were teammates, Hamilton added: “I saw a a replay of Michael and Barrichello years ago, and I was disappointed back then as a fan. We never want team orders like that to happen.

“The great thing is Toto and Niki [Lauda] have been great these past three years and allowed us to race. That’s what racing is about. It’s not always going to be perfect, but that’s motor racing. Every engineer and mechanic has been through all the different categories and seen the good and the bad. They know these things can happen.

“We’re driving at over 200mph. You expect us to drive around and never have a problem? I doubt it. So I hope that it doesn’t change and I hope we can continue to race. That’s just my honest opinion from my love of this sport.”

Rosberg made clear he would be willing to accept team instructions if Mercedes felt it necessary.

“Toto and Paddy [Lowe] are extremely competent people, and that’s in their hands,” said Rosberg. “If they feel that’s the way to go then I would accept it. That’s it. It’s not in my control.”