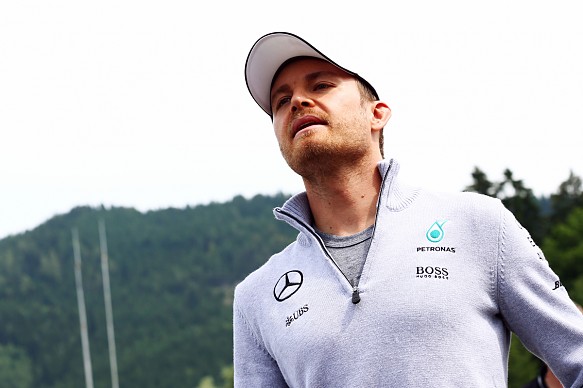 Nico Rosberg has been handed a 10-second time penalty for causing a collision with Mercedes Formula 1 teammate Lewis Hamilton on the last lap of the Austrian Grand Prix.

Although found guilty by the stewards, the penalty is effectively meaningless as Rosberg retains his fourth place and just finishes four seconds ahead of Red Bull’s Daniel Ricciardo in fifth, rather than 14.

Rosberg was also reprimanded for a second offense of continuing on track with a damaged car, spreading debris, and with the front-wing detached.

Regarding the first offense of causing a collision, the stewards made clear Rosberg was at fault for not allowing Hamilton “racing room.”

With Rosberg struggling with brake issues, Hamilton attacked on the outside of Turn 2, only for the pair to collide.

The stewards’ statement read: “Having taken note of the extensive evidence given by both drivers and the video and telemetry data, it was apparent that car #44 [Hamilton] was in front of car #6 [Rosberg],  i.e. more than fully alongside.

“The driver of car #44 could have clearly made the turn on the track, if not for the resultant collision.

“Car #6 did not allow Car #44 ‘racing room’ and hence the driver of car #6 was responsible for the collision.”

Rosberg has also been given two penalty points for the incident, his first for the 12-month period.

Prior to the announcement of the stewards’ decision, Rosberg was adamant he had left enough room for Hamilton and that he did nothing wrong.

Explaining his actions, Rosberg said: “I’m on the inside, I have the right to defend. I don’t need to take the ideal line [into Turn 2].

“I had Lewis on the outside and I wanted to keep him there, of course, always leaving him track space, that’s clear. That was always the intention. It’s a fact he had space. You can look at the onboard and all the other cameras.

“Of course, after the collision it may not look like it, because I am airborne and I lose grip and it takes me further out of the track, and after that it may look like there was less space, but that’s irrelevant because that’s after a collision.

“I just want to repeat – at all times there was space prior to the collision!”

Regarding the second infringement, the stewards’ statement read: “Article 22.11 of the Formula 1 sporting regulations requires a driver with serious mechanical difficulties to leave the track as soon as it is safe to do so.

“We do note the extenuating circumstances, and the fact the driver of car #6 did slow down significantly and attempted to mitigate the risk to other drivers and cars.”