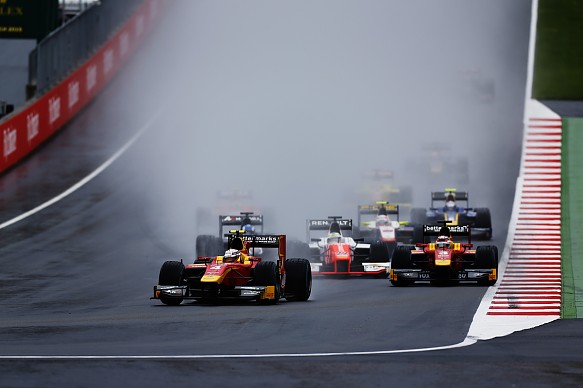 Jordan King led from pole position to the checkered flag in an absorbing reversed-grid GP2 Series race at a wet Red Bull Ring.

King was elevated from 10th to eighth in the results of the Saturday feature race thanks to a couple of post-race penalties to other drivers, giving him pole position for Sunday. The Racing Engineering driver grabbed the opportunity with both hands and was never seriously threatened throughout a race that featured a festival of overtaking in his wake.

After three laps behind the safety car, King led teammate Norman Nato, but the Frenchman seemed to struggle for pace in the wet.

It took a few laps for Oliver Rowland to breach Nato’s defenses, and once into second the MP Motorsport man cut the gap to King, but the leader then responded to pull out a four-second advantage.

The safety car appeared with seven laps remaining after Nicholas Latifi spun at Turn 1 and came to rest just off the track on the inside, but the field spent just one lap under caution. King made no mistakes on the restart and Rowland had no chance of challenging him.

Raffaele Marciello had stayed close to Rowland for most of the race, but the Russian Time man came under threat from Alex Lynn, who had stormed through from 11th on the grid in his DAMS car, at the restart. It took about half a lap to complete the move, but Lynn got the better of Marciello to complete the all-British podium.

Marciello then had to fend off a feisty Antonio Giovinazzi, the Prema man having taken to the gravel early in the race before redeeming himself with a mighty drive back up from 13th position, and only just failing to catch Marciello on the line.

Luca Ghiotto was also well in the mix but there was heartbreak for the Trident driver when he spun at the final corner of the last lap, dropping to ninth – and out of the points – behind Sergey Sirotkin, Pierre Gasly and Mitch Evans.

The late safety car gave the midfielders chance to make an opportunist switch to slicks for the drying circuit. But the brevity of the caution meant they were too far adrift of the field once they rejoined, and to compound this the crossover came with only two laps to go.

Artem Markelov was the best of them in 11th, although Nato claimed fastest lap at the flag on his way to 12th.